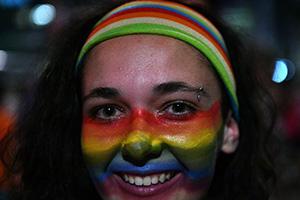 Almost 500 LGBT Brazilians suffered violent deaths at the hands of homophobia in 2017, according to new research.

Watchdog group Grupo Gay de Bahia found a 30-percent increase from the reported 327 deaths in 2016. The same group revealed that an LGBT person was killed every 19 hours in that country.

In 2017, there were 387 murders and 58 suicides directly related to homophobia. This comes out of an increasingly violent Brazil, which saw a record 62,000 homicides in 2016. But soaring homophobic killings worry LGBT people in the South American nation.

Brazil has become a dangerous place for LGBT people. Gay conversion therapy, a practice of psychologically attempting to change someone sexual orientation which is widely discredited by the medical community and LGBT groups, is legal in the country. Homophobic speech is not a federal crime, however.

Despite this, same-sex marriage is legal in the country, and employment discrimination for sexual orientation and gender identity is illegal.

“In the last decade Brazil looked to produce policies that could protect vulnerable groups like gay and trans people but they mostly failed, due to lack of investment or change in vision of policy,” said Jurema Werneck, executive director at Amnesty International Brazil, told The Guardian.

Luiz Mott, an anthropologist and president of Grupo Gay de Bahia, told the publication that ultraconservative politicians have led to the rise in homophobic violence.

“It’s a discourse that destroys solidarity and equates LGBT people to animals,” he told The Guardian.

2017 was also the deadliest year yet for LGBT people in the U.S., according to The New York City Anti-Violence Project’s annual “Crisis of Hate” report. The study found an 86-percent increase in hate violence homicides in the U.S., with 52 LGBT hate-based killings in 2017, compared to 28 deaths in 2016. The Pulse Nightclub massacre was not included in the 2016 single-incident report.