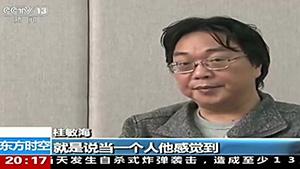 Chinese authorities have allegedly seized a Chinese-Swedish citizen from the train to Beijing – despite the presence of two Swedish diplomats.

Publisher Gui Minhai had recently been released from prison. His Hong Kong publishing house sold books about the personal lives of China’s leadership.

Mr Gui’s train was suddenly boarded on Saturday by plainclothes officers who took him away, his daughter said.

He was headed to a Swedish mission for a medical examination reports said.

The New York Times – which first covered the story – said two diplomats from the Shanghai consulate had been accompanying Mr Gui.

His daughter, Angela – who leads a campaign from Britain to free her father – told the newspaper: “I just know that things have taken a very drastic turn for the worse.”

She did not know the details of the confrontation, she said.

Sweden, meanwhile, is understood to have summoned the Chinese ambassador over the incident.

“The Swedish Government is fully aware of what happened,” it said – without independently confirming the details.

“Firm actions have been taken at a high political level and we have been in contact with Chinese officials who have promised us immediate information about his condition.”

Mr Gui’s case made international headlines when, in October 2015, he vanished from Thailand – before mysteriously turning up, alongside his colleagues from the Hong Kong Publishing house, in detention in mainland China.

Allegations he was abducted by Chinese agents – across international borders in an extrajudicial process – sparked international concern.

Chinese officials, however, say Mr Gui and the four other men all went to China voluntarily.

He later confessed to being involved in a road traffic accident more than a decade earlier – a confession supporters say was forced.

Human rights groups believe the publishers are victims of a crackdown on dissent against China’s ruling communist party.

The former British colony of Hong Kong, however, is supposed to have distinct legal autonomy under the terms of its handover to China in 1997.

In October 2017, he was released from prison, but could not be found by his family. It has since emerged that he has been living in the city of Ningbo.

Mr Gui had begun to show signs of a disease of the nervous system, called amyotrophic lateral sclerosis (ALS), and was headed to the consulate in Shanghai for tests, the New York Times said.

But the South China morning Post quoted friends and contacts of the publisher as saying that Mr Gui had applied for a new Swedish passport, and may have been travelling to the consulate in connection with his application.