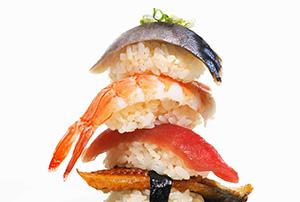 As eating raw fish has become more popular, gruesome tapeworm tales have emerged. But how worried should sashimi lovers be – and how else might we become infected?

The good news, said A&E doctor Kenny Bahn, was that the patient who had turned up at the emergency department was not dying. That is about the only happy element of the story Bahn, who works at a hospital in California, went on to tell on This Won’t Hurt a Bit, a medical podcast, about a man who arrived at hospital carrying a plastic bag. Inside the bag, wrapped around the cardboard tube of a toilet roll, was a 1.7-metre (5ft 6in) tapeworm. Bahn measured it once he had unravelled it on the hospital floor.

The patient had complained of abdominal pain. During a bout of bloody diarrhoea, reports Bahn, “he says: ‘I look down and I look like there’s a piece of intestine hanging out of me.’ What’s racing through his mind is he thinks he’s dying … He grabs it and he pulls on it and it keeps coming out. ‘What is this long piece of entrail?’ And he picks it up and looks at it and what does it do?” There is a dramatic pause to enhance the horror. “It starts moving.”

Bahn said that the tapeworm had probably come from the patient’s daily intake of salmon sashimi. “He told me he was freaked out, but I guess when you think you’re dying because your entrails are shooting out your bottom and you find out it’s not you, but something else, that’s probably a good thing.”

The story has attracted attention all over the world, as these things tend to do, says Peter Olson, a tapeworm expert and a researcher at the Natural History Museum’s life sciences department, “because they’re gross”. The worm, he says, was “almost certainly something called the broad fish tapeworm … salmon is one of the main ways you would pick it up, if you don’t cook the meat.” The life of the broad fish tapeworm involves more than one host. “A typical life cycle might include a bear that feeds on salmon, then defecates back into the river. The larvae would be passed into the environment and, in the case of an aquatic life cycle like this, it would be eaten by something like a copepod, a little crustacean. When that copepod is eaten by a fish, it would transform into a larval tapeworm and that’s what is being transmitted to a human in this case. That would go to the intestine and grow into this giant worm.”

The tapeworm is a monstrous and impressive creation. It has a segmented body, with male and female reproductive organs in each segment, so it is capable of self-fertilisation. It does not have a head as such – its “head” is only useful for holding on to its host’s gut, rather than for “eating” (it absorbs nutrients through its skin). In many cases, you would not know you were infected. You might spot bits of tapeworm segment in your stool – small, pale, rice-like bits – or experience stomach pain or vomiting.

Of the more than 10,000 known species of tapeworm, only a small number can infect humans. The type of tapeworm you might pick up from sushi or undercooked fish is deeply unpleasant, but relatively harmless – although it may cause gastric symptoms and allergic reactions. In rare cases, it can obstruct the intestine (a worm can reach a length of 15 metres or even 25 metres, according to one scientific paper). It is fairly easily treated with the type of worming tablets given to pets.

In those cases, Olson says chillingly, the human is the “final host”. But it is when we are the “intermediate host” that tapeworms can cause significant damage. “The problem is that the larvae don’t grow in the intestine, they move to other parts of the body and in particular to the central nervous system,” says Olson. They can cause cysts in the body, such as in the brain, causing seizures and headaches. In some cases, they can be fatal.

The transmission is far more likely to come from faecal contamination, rather than eating undercooked meat, he says. “It’s a huge problem in places such as Central America, where there is a large pork industry and amount of pig farming; the worse the sanitation conditions, the more likely there is to be transmission,” says Olsen. Tapeworm infection is thought to be a cause of up to one-third of cases of epilepsy in the region.

The fox tapeworm, transmitted from fox faeces, is another variety of damaging parasite. However, although it can be found in Europe, it is not found in the UK. People can get it by ingesting it unwittingly. “A child, therefore, might be more likely to end up with those sorts of things.” Could you pick it up from pets? “Again, only through faecal contamination.” Olson recalls a case where a man was thought to have been infected with a parasite by a dog. However, he had HIV and his immune system was weakened. The tapeworm infection “wouldn’t have survived in him if he wasn’t immunocompromised. In most cases, we don’t share the same parasites [as a dog]. But the dog can bring faecal contamination in from the outside.”

Another horrible case involved a patient who had HIV and was thought to have cancer. However, biopsies from tumours found that they were not human cancer cells, but cells from a cancerous tapeworm (he died before he could be treated). He had been infected with Hymenolepsis nana, a common tapeworm thought to affect up to 75 million people at any one time. An infection with this parasite is easily treated, but this case highlights the severe problems it can cause, particularly in areas of the developing world where there are high rates of HIV.

These are among the cases that have affected many of the world’s poorest people. Such illnesses could be eradicated with investment in sanitation, education and drug administration – the World Health Organization has added tapeworm infections to its list of major neglected tropical diseases. These are not the rare, horrific-but-fascinating stories of California sushi-eaters becoming host to a parasitic worm.

However, doctors have warned that contracting diseases in this way is a risk of which we should become more aware. A case report in the British Medical Journal last March told of a 32-year-old man in Portugal who was admitted to hospital with severe abdominal pain; an endoscopy revealed a parasitic worm was attached to his gut wall and it was removed. It is thought he ingested the parasite while eating sushi. “Owing to changes in food habits, anisakiasis [disease caused by worms from fish, causing symptoms such as pain, vomiting and diarrhoea] is a growing disease in western countries, which should be suspected in patients with a history of ingestion of raw or uncooked fish,” wrote the researchers.

In the UK, EU food hygiene legislation requires fish that is to be eaten raw or cooked lightly be frozen first (although some farmed fish is exempt), since cooking fully or freezing kills any parasites. Tapeworms from fish probably cause more economic damage, says Olson, than human damage. “If you have contaminated meat, you can’t sell it. If you’re farming salmon and lots end up with the parasite, you’ve got a lot of meat you can’t sell. In terms of humans getting this parasite, it’s not a killer. It’s just a gruesome thought.”