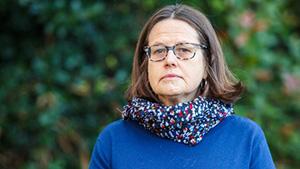 If you could see how the rest of your life might play out would you want to? Jackie Harrison has a 50-50 chance of a disease that has taken her mother, uncle and grandfather. Should she take a test to find out whether she will get it too – and could she cope with the result? The BBC’s Sarah Bowen has been following her story.

It’s rare for a day to pass when Jackie Harrison doesn’t wonder if she’s inherited the faulty gene that could lead to her developing Huntington’s disease, a condition that causes certain nerve cells in the brain to waste away and slowly robs you of the ability to talk, to walk, to move, to think, to swallow.

There is no treatment for Huntington’s and no cure.

Jackie is 51 and lives in Brighouse, a small, industrial town in West Yorkshire, with her partner of 30 years, Tony, and younger brother, Mark.

When Jackie was 12 her mother, Jean, who’d been a teacher, died from the disease at the age of just 48.

Her father left the children to be brought up by their grandmother, 78-year-old Edith, who had already lost her husband to Huntington’s.

“I’ve not had a normal life, it’s taken everything from me,” Jackie says. “I don’t know what it’s like to have a mum and dad, to have that stability.”

Jackie wanted to become a teacher like her mum and grandmother, but when Edith died it was up to Jackie to run the house and look after her brother.

She got a job and managed to keep a roof over their heads while Mark took his exams at school. Then, when Mark went to university, Jackie was able to work part-time and study herself – gaining a degree and doing a teaching diploma.

But then Mark developed Huntington’s and for the past 10 years Jackie has been his full-time carer.

“I prepare all his food, do his shopping, do all the cleaning,” Jackie says. “As soon as he’s got clean clothes on he’s dirty straightaway, spills his food down him all the time.”

Jackie helps Mark with everything, from going to the toilet to organising his finances.

Having a parent who had Huntington’s means Jackie has a 50-50 chance of developing it herself and the possibility that she will is always there at the back of her mind.

“I twitch my shoulder and I know I do it. Sometimes I’ve got a twitchy eye,” Jackie says. “I’m being bad tempered, shouting at people. So you think, ‘Is this the start of it?'”

But Jackie’s never wanted to take the Huntington’s test, whenever she’s thought about it she’s always backed away, her partner Tony says.

It’s early December 2016. Jackie has her first appointment with a clinical geneticist at Leeds General Infirmary to discuss the possibility of taking the test.

She’s not really had much time to think about the idea, what with the stress of looking after Mark and trying to get funding to build an extension for a specially adapted bathroom for him.

If you get a positive result you’re effectively getting a death sentence. You know exactly how are you going to die

Jackie’s also learning to drive – something she’s never done before because she knows she’ll only have to give it up if she does get Huntington’s.

“I remember coming back from the seaside once in the car with my uncle and being stopped by the police – they thought he was drunk,” Jackie says.

“Eventually the car was taken off us. So what’s the point in going through all this heartache, wasting a year of my life and spending all this money if I do test positive for this bloody disease?”

Jackie’s not even sure that she’s really ready to find out if she carries the Huntington’s gene.

“I don’t know how far with the process I will go. This might be the end of it today, I don’t know,” she says.

Jackie and the doctor talk through her family history and the pros and cons of taking the test for about an hour.

“There’s no medical reason to do the test,” Dr Emma Hobson explains. “We have to think very carefully about a bad result and the impact of that. You may say that you’ve always thought you’re going to get Huntington’s, but the reality of actually being told, ‘Yes, you are,’ that’s quite a big step .”

Jackie gets upset, she’s not sure Christmas is the right time, maybe it’s not a good idea to go ahead just now.

“It puts a microscope to everything you’ve lost,” she says. “Maybe in the spring.”

Jackie agrees to return for another meeting in a couple of months.

“If you get a positive result you’re effectively getting a death sentence. You know exactly how are you going to die, which is a lot of knowledge to take on,” she says.

“I suppose that’s why there’s so much counselling upfront. Would I throw myself under a bus? I don’t know.”

As Christmas approaches Jackie is busy looking after Mark and trying to raise the profile of Huntington’s disease with an idea inspired by her border terrier, Sybil.

She’s sewing and sending out hundreds of little green and pink felt dogs to encourage friends, celebrities, anyone, to photograph themselves with one, just to get people to talk about the disease.

“I’m not very good at crafts, but I’ve managed to make six or seven hundred of these,” Jackie says, “it’s driving me crazy picking up bits of thread and felt.”

For as long as she can remember, Jackie’s felt that Huntington’s has been a hidden disease – as though it were a shameful thing to have in the family.

“In America researchers in the ’20s thought Huntington’s disease families were tainted by witchcraft,” Jackie says. “And the language around it is fascinating – it’s a devil’s disease, or it’s a curse.”

Many families hide Huntington’s, she says, and that feeling of shame passes through generations. She remembers being embarrassed as a child, going out with her own mother.

“Mum wanted to go to the Brighouse Gala but then she’d fall over and have a cut leg, and so you’re the one with the mother staggering about looking like she’s a drunk, not like the other ones,” Jackie says, fighting back tears.

“And you’re frightened it’ll be you next and nobody will want you because you’re going to get the same thing, it just goes on for generations.”

But after Jackie and Mark there won’t be any future generations of this family with Huntington’s. Mark never had the chance to marry and have kids before the disease took hold, and although Jackie and Tony have been together for more than three decades they’ve never had children either.

More from The Untold

Tony would have liked to have married Jackie but with everything else going on it would just be another thing to organise now. He says it’s hard to imagine how different things would have been if there had been no Huntington’s in their lives.

“I should imagine we probably would have had children – we would have had no reason not to,” Tony says. “It’s something that I’m sure Jackie regrets.”

But having a family is something Jackie’s never really allowed herself to think about too much because she’s always believed she carries the faulty gene.

“You toy with it, but I think you just put it away because you wouldn’t want to inflict this on to anybody else,” she says.

It’s a warm, spring day in early May 2017 and Jackie and Tony are back in Leeds, on their way to the next hospital appointment.

“At the end of the day, it’s never going to be the right time. So what do you do? Live without the knowledge? Or crack on and get it done?” Jackie says.

Since her last visit here government funding for the bungalow extension has come through and building work has begun on the accessible wet-room for Mark. Jackie’s also passed her driving test.

“Every time I get in the car I think, ‘This is really bizarre,'” Jackie says, smiling. “But it will be useful.”

She’s feeling more determined to go ahead with the test and spends an hour talking through the impact that both a positive and negative result might have.

If Jackie wants to go ahead with the test she now can.

Five months later, on Friday 13 October 2017, Jackie is back at Leeds General Infirmary. Emma Hobson explains how she will tell Jackie the results at the next appointment if she goes ahead and has the blood test.

“I will make sure your appointment is the first of the afternoon and I will call you in and I will say, ‘Hello, I’ve got your results. I’m really pleased it’s good news’, or ‘I’m really sorry it’s not,'” she says.

“We will not be chatting, or passing the time of day, or talking about the weather.”

She goes through the consent form with Jackie and continues to check that this is really is the right thing for her.

Jackie has her blood taken by a nurse. It takes just seconds.

A month has passed. It has been a long wait.

Jackie and Tony have arranged to get a new dog in the days after Jackie gets her results. Their beloved Sybil passed away in September after more than 14 years with them, and they think that the new puppy, another border terrier they’ll call Spike, will help keep their minds off things.

Jackie’s been having strange dreams and is nervous and feeling stressed, but soon she will know the answer to the question she’s wanted to know but been too frightened to ask almost all of her life.

Little is said on the car journey to the hospital.

Emma Hobson comes to the door of her office in the neurology outpatients department.

“Come in and have a seat Jacqueline,” she says. “Welcome, I’ve got your result, and it’s good news. Have a look.

“The doctor said to us: ‘I’m sorry, I’m so sorry.’ The nurse on duty cried,” says Sally Phillips, recalling the day when her 10-day-old son, Olly, was tested for Down’s syndrome. Already 90% of women in the UK who know their baby will have Down’s syndrome opt for termination and Phillips worries that a new, very accurate test will cause the number to rise. Will Olly be one of the UK’s last children with Down’s?