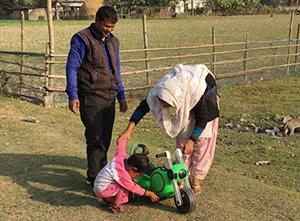 It is like the plot of a Bollywood film.

First, two babies are born within minutes of each other and then accidentally switched at birth in the hospital.

Second, they are from very different backgrounds. One set of parents is tribal Hindu, the other Muslim.

The twist? After a long battle with the authorities, the DNA tests finally come through two years and nine months later… and the toddlers refuse to leave the parents who have raised them.

On Wednesday the couples head to court to confirm that they will bring up each other’s children.

The story is from the north-eastern Indian state of Assam.

Shahabuddin Ahmed says he took his wife, Salma Parbin, to the Mangaldai Civil Hospital at 06:00 on 11 March 2015 and that she gave birth to a boy an hour later. As it was a normal delivery, she was discharged the next day.

“A week later, my wife told me, ‘This baby is not ours.’ I said, ‘What are you saying? You shouldn’t talk like this about an innocent child’. But my wife said there was a Bodo tribal lady in the labour room and ‘I think our babies have been switched’. I didn’t believe her, but she kept insisting.”

Salma Parbin says she suspected from the beginning that Jonait was not her real baby.

“When I saw his face, I had doubts. I remembered the face of the other woman in the labour room and he resembled her. I could make out from his eyes. He’s got small eyes, no-one in my family has eyes like that,” she told me.

When Mr Ahmed told the hospital superintendent about his wife’s suspicion, she told him that his wife was mentally ill and needed psychiatric help. Mr Ahmed then filed a right to information petition, seeking details of all the babies born around 07:00 that day in the hospital.

A month later, he received the details of seven women. After looking at the records, he decided to check out “a tribal lady” as there were too many similarities in their circumstances – both had given birth to male babies, each weighed 3kg (6.6lb) and the births were just five minutes apart.

“I went to their village twice, but I could not muster the courage to visit their home,” Mr Ahmed said.

“So I wrote them a letter. I said my wife believed that our babies were swapped and asked them if they also suspected it. I wrote down my phone number at the bottom of the letter and asked them to call me.”

Barely 30km (19 miles) from Mr Ahmed’s home is the village where the tribal couple, Anil and Shewali Boro, live with Riyan Chandra, their toddler.

The couple did not suspect their child had been switched until they received Mr Ahmed’s letter. Mr Boro didn’t believe it was possible, nor did his wife or other family members. But things changed when the two families met.

“The first time I saw him, I realised he resembled his father. I felt very sad and cried. We are Bodo tribals, we are not like the other Assamese or Muslim people. Our eyes slant upwards, our cheeks and hands are plumper. We are different. We have Mongolian features,” says Shewali Boro.

Salma Parbin says when she first saw Riyan, she knew he was her child and wanted to do a swap right then and there, but Mr Boro’s mother rejected the proposal.

On Mr Ahmed’s insistence, the hospital authorities set up an inquiry into the allegations. But after consulting the nurse who was on duty in the labour room on the day of the birth, they denied any wrongdoing.

Not convinced, Mr Ahmed sent blood samples of his wife and baby for DNA testing and in August 2015, when the report came, he finally had an answer – that there was no genetic match between Salma Parbin and Jonait.

After the hospital authorities told him that the report was not acceptable in law, he lodged a police complaint in December of that year.

Sub-inspector Hemanta Baruah, who investigated the case, told the BBC that he obtained the birth records from the hospital and visited the two families to piece together the story.

In January 2016, he travelled with the blood samples of the two couples and the babies to Kolkata (formerly Calcutta), but the forensic laboratory there refused to carry out the tests because of a clerical error in the form.

“So we collected the samples a second time in April last year, they were tested in a forensic lab in the state capital, Guwahati, and we got the results in November. It proved Mr Ahmed’s allegations that the babies were switched at birth.”

Mr Baruah then advised Mr Ahmed to go to court and ask the magistrate to allow a swap of the boys. But on 4 January, when the families arrived at court to carry out the exchange, the toddlers refused to leave the parents they had grown up with.

“The magistrate told us that if we wanted to swap the babies we could do it, but we said we won’t do it. Because we’ve raised them for the past three years, we can’t just let them go,” says Salma Parbin.

“Also, Jonait was crying. He was in my brother-in-law’s lap, he held him tightly, wrapped his arms around his neck and refused to leave.”

Riyan, too, threw his arms around Shewali Boro’s neck, began crying and refused to let go.

Anil Boro says that swapping the boys now could hurt them emotionally because the children are too young to understand what’s happening.

It’s obvious the children are very attached to the families they are living with and the affection is reciprocated.

In fact, when I visited the Boro home last week, the grandmother had taken Riyan away because she feared he would be taken away from them.

An hour later, one of his uncles brings him back. The grandmother returns a little later, with a bunch of tiny silver fish for the child.

As he goes happily to sit beside her, she asks me anxiously, “Is there a problem? Will they take him away?”

The uncle too pitches in: “Look at his face, he’s so loveable. How can we give him up?”

Riyan refuses to leave Shewali Boro’s side even for a moment.

Jonait, too, has endeared himself to the Ahmed family.

“The day we were going to court to swap him, my eight-year-old daughter told me, ‘Ma please don’t send him away. I’ll die if he goes away’,” Salma Parbin says.

I ask him if their religious differences could become an issue some day.

“A child is a child. He’s God’s gift, he’s not Hindu or Muslim, everyone comes from the same source, from the same design. They become Hindus and Muslims here,” he says.

Mr Ahmed says the toddlers will not be able to adjust if they are switched again now because the living styles, language, culture and food habits of the two families are very different.

For the mothers, though, the internal debate is all too visible – there’s obvious attachment to the child they’ve been raising. But the one they carried in the womb also has an emotional pull.

When the children grow up, they say, they can decide for themselves where they want to live.

For the moment, the families are trying to work out a roster, to meet regularly, to become friends, to somehow be a part of the life of their biological children.