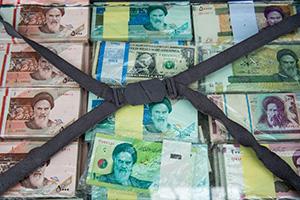 By Golnar Motevalli and Ladane Nasseri

Iran’s central bank has ceased issuing permits and licenses for new private banks or commercial lenders, following a credit crisis that has seen the collapse of a parallel financial industry, freezing the savings of thousands of depositors.

Several of Iran’s commercial banks and so-called credit institutions or funds — whose high interest rates attracted widespread popularity over the past 15 years — have collapsed or received government bailouts in the past year, sparking protests last summer and fueling recent demonstrations against Iran’s political establishment over rising agricultural prices and its handling of the economy.

“I’ve instructed the central bank not to issue any permits to any new private banks since issuing unlicensed permits creates problems,” President Hassan Rouhani said Monday in his first major live television appearance since the protests erupted earlier this month.

The demonstrations targeted Iran’s political and clerical establishment. Some 25 people were killed and about 1,000 arrested, according to Iran’s judiciary. A reformist lawmaker, Mahmoud Sadeghi, said that more than three times that number had been detained. In several towns, banks and credit institutions were attacked by protesters. The unrest has revived concerns over how a parallel financial industry was able to thrive without oversight and regulation.

“People have a right to protest but we’re determined to solve the problem facing depositors at financial credit institutions, which has affected two to three million families, we’ve not forgotten,” Rouhani said, adding that the institutions under scrutiny emerged during the previous decade, before he took office.