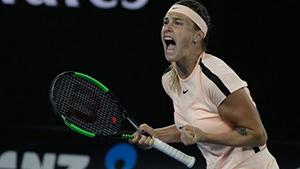 She was mocked online, and on court, with many in the crowd at the Australian Open on Tuesday, going so far as to openly imitate her “grunts”.

But watching Belarusian tennis star Aryna Sabalenka audibly express herself as she faced off against Australian Ashleigh Barty was one of the most liberating things I’ve ever seen, or heard.

Just as liberating, was watching World Number One Romanian Simona Halep and American Lauren Davis battling it out it physically, mentally, and audibly in the third set of their game on Saturday.

I’m autistic, and everyday I struggle with what sounds to let out or keep in and what words to say or not say. Verbal expression makes or breaks me. I live in a constant state of fear that I’ll be perceived as “too much” or “too sensitive.” And as Sabalenka gave her all in front of millions of people around the world, she expressed how she felt without shame. With every hit of the ball, she was free, and for this, she’s my heroine. If anything, the haunting, mocking coos, and general attitude of disdain toward her was the most disturbing part of the game.

Women – and men – are expected to remain cool, stoic and poker-faced at all times. During the subsequent match between Barty and Italian Camilla Georgi, they were commended for their “quieter” game and Barty was even congratulated for not “drawing attention to” or making an “issue out of” what was thought to be an injury.

So we aren’t meant to sweat, make noise, be wounded, angry, sad, disappointed or frustrated. Everything that makes us human, and everything that unites us with these elite tennis players, is deemed to be a bit unappealing and a bit unnecessary.

“Grunting” on court gets a lot of criticism and some players say that when their opponent makes too much noise it has the power to “throw them off their game.” I can imagine that the articulation of so much feeling could be intimidating and unsettling. Nevertheless, I have yet to hear one “grunter” admit to using his or her vocal expression on court for the purpose of throwing off their opponent.

Because, ultimately, a grunting woman is not the problem, our relationship with her is. Barty was ready to face Sabalenka even if the crowd and commentators weren’t. When interviewed after the match, she said, “I was prepared for Sabalenka’s grunting. It didn’t bother me.”

She had done her research.

Belarusian women have gotten a hard time for audible-feeling-sharing at the Australian Open. In an interview in 2015, former world number one and so-called “queen of scream” Victoria Azarenka noted how strange it was that men received less negative attention for expressing themselves on court.

“It’s … in a way annoying because guys grunt. I was practicing next to Nadal, and he grunts louder than me, and nobody notice that. Why? I don’t understand why… the women on the court, both trying their hardest, and giving everything they have, and they make a noise. Is that a problem of tennis?”

Well, it’s a problem of society.

We’re inhabiting a moment where women are being encouraged to express their feelings. What happens when what they have to share doesn’t look or sound pretty? If the mockery both on and off the court is anything to go by, they’re persecuted.

“Why did she have to be so angry?”

“Why did she scrunch up her face and curse in a language we don’t speak?”

Every time a visible and successful woman moans or yells or shrieks or screams on court at the Australian Open, there are millions of men and women choosing not to make a sound. They’re hiding their thoughts and feelings out of fear of retribution. They’re choosing to remain silent. They’re adhering to social expectations and pressures. They’re wanting to appear strong for their families. They’re working in an environment that idolises a lack of feeling and, as a result, they believe that there is no place for their own.

So, at the very least, when we watch the tennis, we deserve to receive the pleasure and sense of empowerment that goes with seeing a sister being amazing, doing her best, and expressing her feelings at the same time. Surely, at this particular moment, in front of these athletes, that isn’t too much to ask.

Madeleine Ryan is a freelance writer based in Victoria.