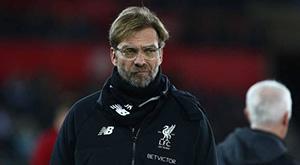 Liverpool manager Jurgen Klopp admitted he lost his cool with one of the Swansea supporters as his side slipped to a shock 1-0 defeat the Liberty Stadium.

Alfie Mawson swept home Swansea’s 40th-minute winner following a poor headed clearance from Liverpool’s £75million record signing Virgil van Dijk, but it was a miserable night for Klopp who was involved in an angry exchange of words with a Swansea fan in the second half.

“He was shouting at me all the time and I reacted once,” stated Klopp.

“I must remind myself I’m a human being and not just a professional manager who takes that all the time.

“They can say whatever they want, at one point I turned to him and said, ‘Please!’

“It was only one moment when I had enough, it wasn’t to do with the fact we were 1-0 down. I’m sure I am not the first manager who has had a problem with him there, he must be a season ticket holder.

“It was my fault as well. I should not react, but I didn’t say anything bad. I just showed I wasn’t happy about what he was saying.”

After the highs of their thrilling 4-3 win against Manchester City in their last Premier League game, a flat Liverpool performance was not enough against a battling Swansea side that collected three valuable points thanks to a 40th minute goal from Alfie Mawson.

Klopp did little to hide his anguish after the game, as he admitted his team ‘were not good enough’ as they struggled to find their attacking spark at the Liberty Stadium.

“I’m frustrated and I’m angry because it was not a good game,” stated Klopp. “We lost the game in the first half. We didn’t do what we wanted to do. It hasn’t happened too often so I didn’t expect that, I was quite surprised. Because of the first half we weren’t flying and they were.

“We made pressure at the end but not enough to score. The last situation was unlucky but if we got a point it would still have been a bad game for us, and it was the opposite of what we wanted. That happens from time to time and it’s never the right moment and like it should be.

“We have to learn from this, we have to get better. The boys have been great for the last few weeks, but this wasn’t good enough.”

Klopp rejected suggestions that Liverpool’s players displayed complacency as they revelled in the lavish praise that came their way after the big win against Pep Guardiola’s City, as the German argued that headline grabbing victory had no effect on his side’s limp performance in Swansea.

“Last week (against Man City) feels like half a year ago, don’t worry about that,” he added.

“We had enough time obviously. What can we do? We spoke about it before, there would be a lot of challenges, playing against top of the table then bottom of the table.

“Everyone is talking very positive, fantastic football, the training week was outstanding. You think ‘wow, everything is fantastic’, we knew about that.

“We talk about tactical discipline and everybody thinks it’s about defence, that’s right, it’s a big part, but as well it’s offensive things, especially when you are a possession team like we are in a game like this. It’s clear where you start, where you have to be in each moment.

“It’s not mathematics, but it’s clear where we can cause them problems. Swansea knows to win this game today they needed our help and unfortunately we helped them.

“It’s not that we threw it away. Swansea are fighting for their life and we’ve no problem with that. We had a problem with our offensive motions. It’s not what we came here for, we have nothing, and that’s our fault.

“At half time we said OK, maybe we can start doing what we wanted to do at the beginning, but because of the first half we were not secure in what we were doing.

“A point for sure would have been OK, but not what we would have wanted before the game so even that would not have made it any better to be honest.”