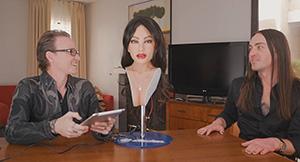 Sex-robots have become a trend in the entertainment world with popular ones even featuring an artificial G-spot and numerous modes of interaction as well as newly-introduced pole-dancing robot strippers, however, the 2018 International Consumer Electronics Show revealed that there are more extraordinary toys being developed.

On stage at CES for Engadget’s After Hours, creator Matt McCullen presented a sexbot named Solana and demonstrated her ability to switch her very life-like face for another.

“The face is actually modular, the same way that within the app you can change the personality settings and create a separate profile and separate avatar, you’re able to remove and attach a different face to the same robot very easily,” McMullen said.

The process might seem rather challenging with the “peeling-the-skin-off” routine, revealing the mechanical skeleton beneath the robotic head.

McCullen showed only the head of the robot, saying that it can be placed next to existing RealDolls using an adapter, and stated that his firm was working on developing a body that will be able to respond to touch.

“I’m pretty gung-ho now about getting movement, working on the neck down. I’ve built a torso that moves and gyrates. I’m working on the arms as we speak.”

Furthermore, he is planning to create male version, too, that obviously will have the “capability of having sexual parts attached to him.”

“I’m thinking more about something that would function the way the male anatomy functions would be really cool – actually able to be stimulated and become aroused,” McCullen added.