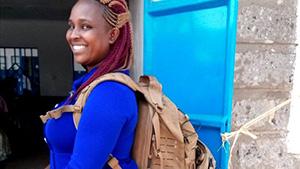 Call the midwife in Nairobi, Kenya, and you may receive a visit from someone like Margaret Wairimu Maina.

She sets off on foot looking something like an astronaut, carrying a backpack stuffed full of hi-tech gadgets designed to monitor a baby’s health.

The pack includes a wind-up foetal doppler used for measuring the baby’s heartbeat, a portable ultrasound screen, a life-light with matching solar panel, in-ear thermometers, and a range of other medical instruments related to pregnancy.

The gear has become crucial for her voluntary job as a community health worker.

Although the backpack weighs just 5kg (11lb) it’s still a heavy load as she does her rounds twice a week, says Margaret. She is responsible for more than 120 households in the local area and manages to see up to 20 a day when she visits between noon and 4pm.

“I have two sons, aged five and 11,” she says. “Both of my pregnancies were very OK with no complications because I started my ante-natal care visits after only two months, and I had a skilled attendant around for delivery.”

Many other women in the country are not so lucky.

In Kenya, unlike other African countries such as Ethiopia, primary health care is not paid for by the government or local authority.

Margaret works out of the Kiambu Community Life Centre north of Nairobi, where voluntary health workers are the first point of contact for those seeking medical help.

“In large parts of Africa, people like Margaret are unpaid volunteers who often lack formal training or even basic equipment to help them with their tasks,” says Jasper Westerink, chief executive of Philips Africa, the firm that developed the backpack.

“For years, we have had strong focus on mother and child care in Africa.”

Working with local government, Philips is developing a number of community life centres to support community health workers and midwives equipped with these hi-tech backpacks.

“Our ambition is to introduce this model throughout Africa to drastically improve access to primary care,” says Mr Westerink.

Meanwhile, on the other side of Nairobi lies Kibera. It is the biggest slum in Africa and though officially home to 500,000 people, some estimate it might actually hold two million inhabitants.

Kibera is an open sewer with little or no sanitation – a random matrix of undulating roads and paths that ambulances cannot access.

In fact, the only thing close to an ambulance is an improvised wheelbarrow with a yellow siren attached to its handles. Patients are placed in the cart and the lucky ones are wheeled to the community health clinic.

But in the remote region of Mandera, on Kenya’s north-eastern border between Somalia and Ethiopia, pregnant women don’t even have the option of a wheelbarrow ambulance.

It takes two days to reach the area by road from Nairobi and the infant mortality rate here is one of the highest in the world with almost 4,000 maternal deaths per 100,000 births.

Public transport is so expensive here that travelling by camel is the only option for pregnant women. It’s not surprising that by the time they finally reach a doctor, they are not only in great danger of losing their unborn child, they are at great risk themselves.

A new clinic was established in the region last year through a partnership between the United Nations Population Fund (UNFPA), Mandera county’s local government and Philips.

“Maternal and newborn health outcomes in Kenya’s remote six counties contribute nearly 50% to all maternal deaths in Kenya and we want to stop that with centres such as these,” says Dr Ademola Olajide of UNFPA.

The remoteness of these regions means that portable health monitoring technologies with mobile connectivity are proving invaluable to local volunteers, who can now access knowledge and advice from experts far away.

For example, in Ghana, the Ghana Health Service and Novartis Foundation are co-operating to develop a nationwide “telemedicine” programme by 2019.

Community health workers can access specialists – doctors, nurses and midwives – through a 24-hour teleconsultation centre. It began as a pilot in a remote part of the Ashanti region in 2011, covering 30 communities of around 35,000 people.

Now Novartis says there are enough teleconsultation centres to serve the entire country.

In another example, Uganda’s MamaOpe has developed a Smart Vest application for the diagnosis and continuous monitoring of pneumonia in young children. The disease can often be misdiagnosed as malaria.

In a matter of minutes, the data collected is sent to doctors who can make a diagnosis quickly and cheaply.

And smartphones are being used a diagnostic tools in their own right, testing for hearing loss, for example.

Plugged in to services such as IBM’s supercomputer Watson, with its ability to absorb vast swathes of clinical and social data and come up with likely prognoses, they are giving local community health workers access to knowledge they would never previously have had.

But while such technology may be impressive, it would of little use without the heroic efforts of volunteer health workers such as Margaret Wairimu Maina.

“Sometimes I find it very difficult emotionally to go into the community and interact with people who are very underprivileged, with little or no resources,” she says.

“But that is what I must do, and it makes me feel happy to be useful and known in the community.”