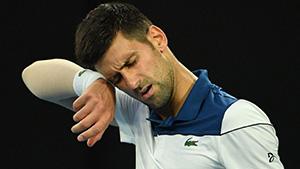 Novak Djokovic crashed out of the Australian Open as an elbow injury that had sidelined him for the last six months resurfaced in Melbourne.

Djokovic battled back from a 4-0 deficit in the first set of his fourth round clash against the unseeded Chung Hyeon only to lose the tiebreak, at the end of which he had treatment on his right elbow.

The issue, which had kept him out of competitive action since Wimbledon last year, seemed to continue troubling him intermittently but he battled bravely before succumbing to a 7-6 (7/4) 7-5 7-6 (7/3) defeat.

It was a mixed bag over the first three rounds, with his remodelled service action at times vulnerable, but there had been no clue his elbow had been a problem until he called for the trainer after losing the opening set 7-4 to Chung on a tie-break.

? Six-time champion Novak Djokovic is out of the #AusOpen2018!

? His conqueror is 21-year-old Hyeon Chung and he did it in straight sets!

The 26-year-old American, who is ranked 97, only made his Grand Slam debut at the French Open last summer and had never won a Slam match before arriving in Melbourne.

Sandgren, who is named after his Swedish great-grandfather, said: “I’m starting to disbelieve it. I don’t know if this is a dream or not. But all you guys are here and I’m not in my underwear so maybe it’s not.

“He played some really great tennis, especially in the fourth-set breaker. I knew I had to take my chances. I knew he probably could out-grind me, he’s a heck of a player. Thankfully it worked out in the end.”

Roger Federer maintained his record of not having dropped a set at the Australian Open with a straightforward victory over Marton Fucsovics to reach the quarter-finals.

The 25-year-old Hungarian was a surprise face in the fourth round and acquitted himself well on Rod Laver Arena but ultimately proved no match for the defending champion, who won 6-4 7-6 (7/3) 6-2.

The victory sends Federer through to the last eight in Melbourne for the 14th time and 52nd overall in Grand Slams, where he is likely to be more severely tested by Tomas Berdych.

This was a first meeting for the pair, although Federer played Fucsovics’ coach Attila Savolt in the second round in Melbourne 16 years ago.

Federer was also playing during the day for the first time all tournament after three matches at night but had no problem making the adjustment and is the oldest man to reach the quarter-finals here since Ken Rosewall in December 1977.

The 36-year-old said: “I thought he played very well. Fast conditions, you have to have quick ideas and execute well and I think he did that very well. I had a hard time breaking through until two sets to love and a break. Credit to him for playing a great tournament, that’s what I told him at the net.”

Berdych has been flying under the radar this fortnight but, after beating Juan Martin del Potro in straight sets, he followed up with an impressive 6-1 6-4 6-4 victory over Fabio Fognini.