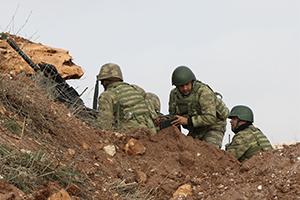 A Turkish soldier was killed on Jan. 22 during clashes with the People’s Protection Units (YPG) in northwestern Syria as part of Operation Olive Branch, the Turkish military said.

According to a statement from the Turkish General Staff, clashes between the Turkish Armed Forces and the YPG and the Islamic State of Iraq and the Levant (ISIL) terrorist groups took place southeast of the Turkish village of Gülbaba, just across the Syrian border.

In the statement, the General Staff conveyed its condolences to the family and friends of the killed soldier.

According to the General Staff, the operation aims to establish security and stability along Turkish borders and the region, as well as protect Syrians from terrorist oppression and cruelty.

The operation is being carried out under the framework of Turkey’s rights based on international law, United Nations Security Council resolutions, its self-defense rights under the U.N. charter and respect for Syria’s territorial integrity, it said.

The military also said it is putting the “utmost importance” on not harming any civilians.