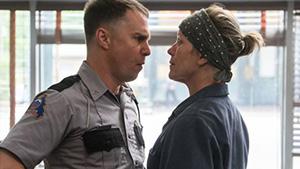 After big wins at the Screen Actors Guild awards – and earlier this month at the Golden Globes – Three Billboards Outside Ebbing, Missouri appears to be front runner for best picture when this year’s Oscar nominations are announced on Tuesday.

But in reality, this year’s race for best film is still one of the most open for years.

Three Billboards may have picked up some of the big prizes, but Academy voters are still more than capable of moving in a different direction – especially as the Oscars doesn’t use a first past the post system for picking the winner.

Instead, it employs a preferential ballot, where voters’ second and third choices can be vital in deciding which film will win.

It’s a system that favours consensus over passion, and a film like Three Billboards – which has proved controversial to some – is the film most likely to be a loser under the current voting rules.

So it would be foolish to write off the chances of mysterious love story The Shape of Water, coming of age tale Lady Bird, or even horror film Get Out.

Studying the winners of other awards bodies is also becoming less valuable when it comes to the Oscars.

Following the #OscarsSoWhite campaign, the Academy has attempted to make its membership less old, white and male. And around 1,500 members of the current voting membership – that’s 20 per cent – have only joined in the last two years.

Some things do seem clear: Frances McDormand’s performance as a bereaved mother in Three Billboards is the one to beat for best actress. Similarly, Gary Oldman’s Winston Churchill in Darkest Hour is way out in front for best actor.

While over the past couple of months Alison Janney, who plays Tonya Harding’s mother in I, Tonya, and Sam Rockwell who portrays a bigoted cop in Three Billboards, have edged ahead of Laurie Metcalf (Lady Bird) and Willem Dafoe (The Florida Project) in the best supporting categories.

Other things to look out for:

Will The Shape of Water lead the way in the nominations?

The answer is almost certainly, yes.

There’s a good chance that it will equal the record of 14 nominations, held by All About Eve, Titanic and La La Land.

Will James Franco be nominated, will he turn up?

The voting period for this year’s nominations was almost over when the latest set of allegations against actor/director James Franco emerged (allegations that Franco has denied).

And with his Golden Globe win for best actor in a comedy or musical for The Disaster Artist, he looks likely to have gathered a large number of Oscar votes before the landscape changed so rapidly.

If he does land a nomination, many will be questioning whether he will actually attend this year’s ceremony. His chances of winning will be pretty close to zero.

Will Greta Gerwig be rewarded?

The best director category hasn’t seen a female nominee since Kathryn Bigelow in 2010 for The Hurt Locker (she went on to win).

And throughout Oscar history there have only ever been four women nominated (Lina Wertmuller, Jane Campion, Sofia Coppola and Bigelow).

So if, as is widely expected, Greta Gerwig gets a nomination for Lady Bird she will become the fifth woman to be recognised in the directing category.

It’s been 13 times unlucky for the British cinematographer who has been nominated over and over again without ever winning.

He’s one of the most respected figures in the industry. His first nomination was for The Shawshank Redemption in 1995, and he’s also been nominated for Skyfall and Sicario.

If, as he deserves, he gets a 14th nomination for Blade Runner 2049, this really should be his year.

Will there be another Corbould family bust-up?

Last year, British special effects supervisor, Paul Corbould (Doctor Strange), was up against his brother Neil (Rogue One) in the best visual effects category – neither won.

But 2018 could see Paul once again nominated – this time for Dunkirk, and he could be competing against another brother, Chris, who worked on Star Wars: The Last Jedi.

Who may get two chances at winning?

If he’s also recognised for The Greatest Showman, he’ll join the select group of people who’ve been nominated twice in the same year for different movies.

It’s also possible, if much less likely, that sound mixer John Casali will get a double nomination for Beauty and the Beast and Darkest Hour.

Could history be made in cinematography?

If Rachel Morrison is recognised in the best cinematography category for Mudbound, a drama about racial tension in Mississippi around and after World War Two, she will make history as the first woman ever to receive a nomination in this category. Yes, ever.

Is this a good year for the Brits?

It’s a potentially great year for UK performers in the best actor category.

Three of the five slots look likely to be taken by Brits: Gary Oldman for his performance as Winston Churchill in Darkest Hour; Daniel Day-Lewis for portraying a renowned, if repressed fashion designer in Phantom Thread; and Daniel Kaluuya who plays a young black man visiting his white girlfriend’s family for the first time in Get Out.