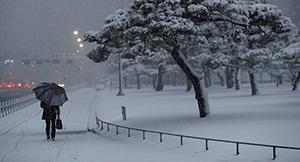 TOKYO (Sputnik) – The heavy snowfalls in Japan have resulted in cancellation and delay of dozens of flights that affected over 32,000 people, the Aviation Wire flights monitor said on Tuesday.

On Tuesday, the both airlines cancelled another 50 flights, both national and international, causing 6,000 more to stay in Japan.

Snowing in Tokyo. It was rare. Such snow has been four years! ☃️❄️ #Tokyo #Japan #Snow pic.twitter.com/hO9sdRjaPg

Snowing in Tokyo, which is unusual and often shuts it down. Today is special though, could have up to 10cm of snow, which is enough to call out the Self-Defence force. pic.twitter.com/s5NN2NOsug

​On Monday, a number of Japan’s prefectures, including Chiba, Tokyo, and Kanagawa, have seen its heaviest snow in four years. The snowfalls have accumulated 23 centimeters (9 inches) of snow during the overnight hours of Monday into Tuesday, according to media reports. About 320 people in Tokyo and six neighbouring prefectures have suffered fractures and other injuries as a result of the heavy show, the Japanese fire service said.