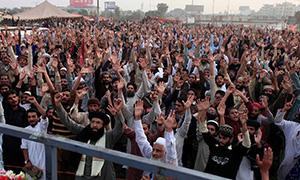 A Pakistani student shot and killed his school principal in a dispute that stemmed from the student missing classes to attend rallies supporting strict blasphemy laws.

Sareer Ahmed, the principal of the private Islamia College in the northern town of Charsadda, had an argument with one of his students for missing a number of classes. The student then shot the principal on campus, police chief Zahoor Afridi told Reuters.

He said the unnamed student had attended a sit-in staged by a new ultra-religious political party, Tehreek-e-Labaik, late last year to oppose a small change in wording to an electoral law, which it said amounted to blasphemy.

The protest, which brought the capital Islamabad to a standstill, ended in clashes between police and demonstrators that resulted in the deaths of seven people and injuries to more than 200. It led the government to back down and accept the resignation of a minister accused of blasphemy.

Insulting Islam’s prophet is punishable by death under Pakistani law and blasphemy accusations stir such emotions that they are difficult to defend. Even a rumour of blasphemy can spark mob violence.

Police have taken the student, who appeared in photographs and video to be 16 or 17 years old, into custody and filed a first information report against him. In a video recorded during the arrest, the student can be heard defending his actions in Pashto, a regional language.

“I committed this murder and I accepted it. It was ordered by God,” he proclaimed.

There was widespread outrage across Pakistan last April when student Mashal Khan was beaten to death at his university in Mardan following a dormitory debate about religion.

Police arrested 57 people, including students and some faculty members, in connection with the killing.

There have been at least 67 murders over unproven allegations of blasphemy since 1990, according to figures from a research centre and independent records kept by Reuters.

In 2011, a bodyguard assassinated the Punjab provincial governor Salman Taseer after he called for the blasphemy laws to be reformed. Taseer’s killer, executed last year, has been hailed as a martyr by religious hardliners.