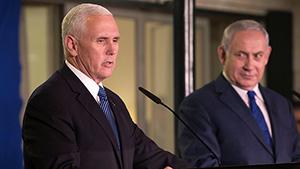 Despite masses of support US vice president receives in the US among the Evangelical Christian community, some Palestinians decry what they describe as his ‘sick ideology.’

Palestinian Christians say US Vice President Mike Pence’s brand of evangelical Christianity, with its fervent embrace of modern-day Israel as fulfilment of biblical prophecy, lacks their faith’s compassion and justice.

Pence was in Jerusalem on Monday, expressing his support for Israel in a speech to the Knesset filled with biblical references. During an exuberant welcome, Pence and Israeli Prime Minister Benjamin Netanyahu publicly rejoiced in the Trump administration’s decision last month to recognize Jerusalem as Israel’s capital.

The policy shift enraged Palestinians, who staged multiple days of rage in the aftermath of Trump’s decision and have since rejected US mediation in any future efforts to resolve their long-running conflict with Israel.

The Jerusalem declaration and a subsequent Trump decision to curb aid to Palestinian refugees had been top priorities for Pence. Israel has complained that the United Nations Relief and Works Agency (UNRWA) perpetuates the refugee crisis by granting a special and unique status to Palestinian refugees not afforded to any other around the world.

The vice president—by his own definition “a Christian, a conservative, a Republican, in that order”—has cited his religious beliefs as the source of his unwavering support of Israel.

He has been embraced by so-called Christian Zionists who believe the establishment of the state of Israel is proof of God keeping his promises and a step toward the second coming of Christ.

In a 2017 speech to Christians United for Israel, or CUFI, an influential organization run by Texas pastor John Hagee, Pence signaled similar views, saying that “though Israel was built by human hands, it is impossible not to sense that just beneath its history lies the hand of heaven.”

In his CUFI speech, Pence stuck to what the vice president portrayed as biblically mandated support for Israel.

Pence has “very solid evangelical credentials,” Parsons said. “We consider him to be … in our camp.”

Palestinian Christians slam the Christian Zionist views as a negation of the teachings of Jesus.

“For me, it’s a sick ideology,” said Munib Younan, the recently retired bishop of the small Evangelical Lutheran Church in Jordan and the Holy Land and former president of the Lutheran World Federation, an umbrella for churches with millions of believers.

“When I say Jesus is love, they want my Jesus to be a political Jesus,” Younan, 67, a Jerusalem-born Palestinian, said in a recent interview at his church.

Younan said he supports a solution to the conflict with Israel, including the establishment of a Palestinian state in the lands Israel captured in the 1967 Six-Day War. Jerusalem, he said, should be shared by Christians, Muslims and Jews, adding that a peace deal would enhance Israel’s security. Israel, however, view Jerusalem as the indivisible and eternal capital of the Jewish people.

Pence on Monday said the recognition of Jerusalem as Israel’s capital as the “only true foundation for a just and lasting peace.” He also said that he supports a two-state solution, once a pillar of US, Mideast policy, saying President Donald Trump is in favor “if both sides agree.”

Christians make up a small minority of the overwhelmingly Muslim Palestinian population in the West Bank, but relations between the two religious groups are typically cordial and tolerant—unlike in conflict-battered Iraq and Syria, where ISIS and other Islamic terror groups and extremists have persecuted Christians. In Gaza, dominated by the Islamic terror group Hamas, a tiny Christian community has been targeted at times.

“We are the authentic Christians and we live with our brothers, the Muslims, without any problem,” said Bethlehem Christian Nadia Hazboun, 55, standing outside a souvenir shop in Manger Square, where the pealing of church bells often blends with the Muslim call to prayer.

Rebecca Littlejohn, a Disciples of Christ pastor from La Mesa, California, said her denomination works with Palestinian Christians and that she belongs to a grass-roots group engaged in peace efforts.

She said that while Disciples of Christ emphasizes Christian unity, “I find very little, from what I know of it, in Mike Pence’s religion that looks like Christianity to me.”