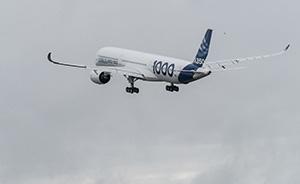 The Persian Gulf company, which had been slated to take the first A350-1000 airliner last month, will do so in February once issues with the setup — which allows seats to be merged into one or face each other for meetings — have been resolved, Al Baker said Monday. Airbus itself met the contract deadline, according to the CEO, who has previously blamed the planemaker and its suppliers for delays affecting the original A350 and A320neo aircraft.

“The installation of the Qsuite is taking longer than what we expected,” Al Baker said in Doha, adding that the complex design of the berth has implications for the certification of the aircraft. The first plane now belongs to the airline but remains at Airbus’s base in Toulouse, France, for fitting out.

The Qsuite seats, developed by Qatar Air and B/E Aerospace Inc., are installed so that sets of four face each other to form a mini meeting area once barriers are dropped. Each berth can also dock with the one next to it to create what the carrier says is the industry’s first double bed in a business-class cabin.

Qatar Air has ownership of key elements of the design, which took two years to develop and has already been installed on some of its Boeing Co. 777 jets.

— With assistance by Benjamin D Katz