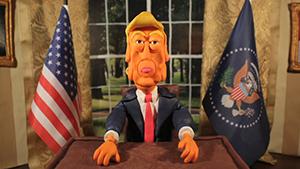 Only 30 percent of respondents in worldwide Gallup poll profess satisfaction with US leadership under President Trump on one-year anniversary since inauguration, marking ‘historic, unprecedented low’; only 4 countries show increase in US approval rating, including Israel.

Public opinion polls marking the one-year anniversary of President Donald Trump’s inauguration—celebrated Saturday—were less than flattering for the embattled commander-in-chief. According to a worldwide poll by the Gallup research company, the United States’ standing in the world has reached an all-time low: only 30 percent of respondents said they were pleased with America’s leadership.

According to the poll, Israel is interestingly one of only four countries where the US’s stance showed the opposite trend and significantly improved in the past year.

Topping this year’s poll is Germany with 41 percent, while China received a rating nearly identical to the American’s with 31 percent, and Russia coming in only three percentage points below their American rivals.

The US rating was dubbed “historic and unprecedented” by the American-based research outfit, as it marks the lowest such rating the US was awarded since Gallup began polling internationally.

In fact, the US scored higher numbers even in George W. Bush’s last year in office—scoring 34 compared to 2017’s 30 percent approval.

When breaking the rating down by countries, it’s evident the American rating has dropped by at least ten percent in 65 countries—most of whom are American allies in Europe and the American continent.

In Canada, for instance, the US approval rating dropped a whopping 40 percent, from 60 in 2016 to merely 20 in 2017. America’s southern neighbor, Mexico, also showed a drop with a 16 percent approval rating—marking an all-time low.

The lowest approval rating for American leadership was voiced by respondents from Russia and Iceland, where only 8 percent voted confidence for Trump’s administration. However, Gallup did note the aforementioned data may be something of an encouraging sign, as it marked a rise in the Russian numbers, compared to last year’s 2 percent approval.

However, there were some exceptions to the US drop in approval rating. The American standing has strengthen among residents of four countries—Belarus, Macedonia, Liberia and Israel.

One of the reasons for the rise among Israeli respondents, Gallup said, was Trump’s declaration of recognition of Jerusalem as Israel’s capital.

Trump’s standing within the United States itself was not much improved. A new poll ordered by NPR-PBS showed that a majority of Americans—53 percent—saw their president’s first year in the White House as a failure.

Holding the opposite view, 40 percent of respondents considered Trump’s first year to be a “success” or a “major success.”

The poll further showed that 61 percent of Americans believed Trump has divided the country since his election. In addition, only 51 percent of Republicans said that Trump’s leadership met their expectations during his first year in office.