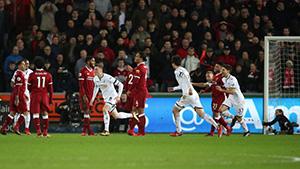 Swansea produced one of the shock results of the season as Virgil van Dijk’s Premier League debut for Liverpool turned into a nightmare.

Alfie Mawson struck the 40th-minute winner for bottom club Swansea, pouncing on a poor Van Dijk clearance from a corner that Liverpool’s £75million record signing possibly should not have conceded.

Liverpool came into this contest unbeaten in 18 games and on a high after ending the unbeaten record of league leaders Manchester City, so few saw this 1-0 defeat coming.

It was a frustrating night for Liverpool but they almost rescued a point in stoppage time when Roberto Firmino’s header, from a Van Dijk cross, came back off a post.

Jurgen Klopp’s side dominated possession and territory throughout, but their usual invention and spark were badly missing, with 24-goal man Mohamed Salah suffering a rare off-night.

Swansea remain bottom of the league – albeit on goal difference from West Brom – but it is now only one defeat in six games under new manager Carlos Carvalhal.

The Portuguese has instilled a real sense of belief that his new charges can avoid relegation, ever since Swansea suffered a 5-0 humiliation at Liverpool on Boxing Day.

It was no surprise that Liverpool set up camp in the Swansea half, with the hosts content to soak up pressure and break on the counter-attack.

But there was a lack of intensity about much of Liverpool’s play, even if Swansea goalkeeper Lukasz Fabianski had to bravely block at the feet of Sadio Mane in the eighth minute.

Swansea did break the stranglehold for Jordan Ayew to race onto Sam Clucas’ pass and find the Liverpool net, but referee Neil Swarbrick had correctly ruled that the ball had crossed the line and awarded a corner.

With so little defending to do, Van Dijk’s presence was felt at the other end and he almost repeated his FA Cup goal against Everton when he glanced Alex Oxlade-Chamberlain’s corner narrowly wide.

Van Dijk then released Salah with a delicious ball over the top, but the Egyptian could not control his difficult volley.

Oxlade-Chamberlain tested Fabianski after some intricate Liverpool passing, but Jurgen Klopp’s were stunned five minutes before the break.

Van Dijk made a hash of Clucas’ corner and his attempted clearance struck Federico Fernandez to fall perfectly for Mawson, who swept home his third goal of the season.

Liverpool were clearly rattled as Andrew Robertson and Joel Matip picked up bookings, but Mane should have levelled on the stroke of half-time when he sent Salah’s cross wide.

Klopp’s side were out early for the second half and there was little respite for Swansea as Liverpool began to crank up the heat.

Salah curled wide and Kyle Naughton produced a last-gasp tackle on Robertson with the full-back appearing to have the goal at his mercy.

Fabianski produced a fine fingertip save from Salah’s free-kick before a rare Swansea foray saw the tireless Ayew keep Loris Karius by a post.

Liverpool inevitably kept coming in the closing stages with Danny Ings, on as a substitute, almost scoring his first goal since October 2015, Joe Gomez firing wide and Salah shooting over.

But Swansea held on for only their fifth league win of the season to reduce the gap between them and safety to three points.

Liverpool boss Jurgen Klopp, whose side thrillingly beat Manchester City 4-3 in their previous match, said on Sky Sports: “Last weekend is not what I’m interested in.

“We are frustrated. I’m frustrated, I’m angry, because it’s not necessary what we did today. But we cannot get the points back. It should feel really bad and it feels bad.

“We didn’t keep the positions we wanted to be in. We wanted to do it differently, obviously it didn’t happen on the pitch.”

Liverpool should have snatched a point at the death when Roberto Firmino headed against a post before Adam Lallana’s follow-up was cleared off the line by Mawson.

Klopp added: “The clearest chance we have in the last second, I don’t know how that didn’t go in.

“That wouldn’t have made the game any better to be honest.

“At the end it was not good enough.”

Swansea boss Carlos Carvalhal revealed he motivated his players by telling them to grind Liverpool’s ‘Formula One’ football to a halt.

“If you put Formula One (cars) in London at 4 o’clock in traffic, (they) will not run very fast,” he said on Sky Sports, explaining what he told his team ahead of the game.

“That must be what we do against Liverpool – make them play the way they don’t like.”

Carvalhal said his players were “brave” and “real gladiators” to see out the victory.