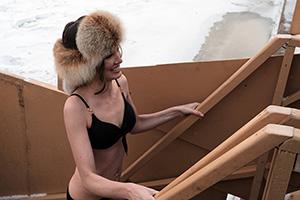 A participant of the St. Petersburg’s Beauty contest reacts after taking a dip in icy water during traditional Epiphany bathing in Neva River on January 18, 2018.

As Russian Orthodox Christians celebrated one of their most important ancient holidays, hundreds of thousands braved the bitter cold to perform the traditional mass bathing ritual to commemorate the baptism of Jesus Christ in the waters of the Jordan River.

More than 1.5 million believers from across the country reportedly took part in this year’s Epiphany, taking an icy plunge in rivers, lakes and seas on Thursday night, the eve of the major religious holiday.

About 2,500 police officers, divers, rescue and medical workers, as well as some 700 volunteers and psychologists assisted participants of the ritual in the Russian capital.