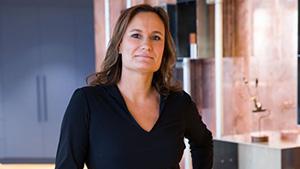 Amid the ongoing fallout from widespread sexual assault and harassment allegations and the #MeToo campaign, gender equality is high on the Davos agenda this year, but the elite annual gathering still has its own issues to solve.

Gillian Tans is softly spoken and unassuming. The 47-year-old isn’t someone you’d immediately associate with power. Yet she has a lot of it.

As the chief executive of online accommodation website Booking.com she’s in charge of a staggering 15,000 employees in 70 countries around the world.

In 2016, she earned an impressive $17.1m (£12.3m; €13.9m). That was more than her own then boss at US firm Priceline which owns Booking.com as well as other travel related brands including Kayak and rentalcars.com.

In the world of business, a successful woman on this scale is still pretty rare.

In Davos for the first time, Mrs Tans says showcasing people like her can help address the imbalance. “Role models are important.”

That’s exactly why the World Economic Forum (WEF) in Davos wants her here.

It’s no secret that the annual gathering of chief executives, world leaders and celebrities has a problem attracting women delegates.

The attendees are still overwhelmingly men, outnumbering women by five to one despite a quota system for large firms which must bring one woman for every four men.

Every year photos of the suit-heavy gathering captioned “spot the woman” do the rounds on social media.

Of course, this largely reflects the current reality – those at the top in both business and politics are predominantly male.

WEF is undoubtedly trying. For the first time in the annual conference’s 48-year history all seven of the conference’s co-chairs are female, yet just 21% of attendees are women, little change from last year’s 20%.

Criticism of Davos as a boys’ club is hard to shake, and not just because of the gender inequality.

Anecdotal evidence suggests that even in these refined environs female attendees may have to deal with unwanted approaches.

“Things can get tricky,” says Mark Turrell, who is attending Davos for the 10th year in a row.

The founder of business social networking application Vork says the overlap between professional work and the notorious night time parties means there can be misunderstandings.

“There is an obvious grey zone where people are not sure. People try to find out and there may be a moment that wasn’t quite expected,” he says.

Mr Turrell organises an informal group of young Davos attendees to help them reduce costs by sharing lifts and accommodation. He says some single attendees bring wedding or engagement rings to reduce the odds of unwanted approaches.

In reality it’s not that surprising.

The outpouring of stories from women using #MeToo has showed just how widespread the issue is. From an unwanted comment or touch to (at the extreme end) physical abuse or rape, the problem is everywhere.

“No matter where we look men are practising these things,” says Gary Barker, chief executive of Promundo, which works on engaging men to end female harassment and violence.

Often in the workplace, he says it may be “subtle psychological denigration”.

One solution, he says, is to use quotas to help promote more women into senior roles.

“Short term a little bit of tokenism could help. There isn’t a shortage of qualified women.”

WEF isn’t shying away from the issue. This year’s conference includes several sessions on what firms and society can do to help put a stop to sexual harassment as well as addressing the much broader issue of gender equality.

Its latest report found that at the current rate of progress it will be another 100 years before we achieve gender parity worldwide. It’s the first year since it started measuring the issue in 2006 that progress has gone backwards.

But Shelley Zalis, founder of a firm which aims to advance workplace equality called The Female Quotient, believes the current heightened awareness will help.

“People are no longer accepting the status quo for the norm,” she says.

This year she has quadrupled the space of her women’s networking lounge, which she sets up at major conferences each year. The space hosts talks from successful women and have attracted some heavyweight commercial partners including Unilever and Google.

Normally called The Girls’ Lounge, this year at Davos she’s called it The Equality Lounge in recognition of the topic’s pertinence – men can also attend.

The location on one of the main roads leading to the conference centre means that it’s impossible to miss.

She describes the lounge “as a safe place” for women, somewhere where they can be themselves. “A minority acting and feeling like the majority” as she puts it.

“No one really understood it [the lounges], but now we’ve got a critical mass working together, understanding that their voice matters, all of a sudden we’re seeing a shift,” Ms Zalis says.

This means the time is right to shake up the status quo with “new rules”, she says.

Yet the workplace solution at least isn’t necessarily complicated.

Booking.com is a case in point. Mrs Tans says more than half of its staff overall are female and they account for 20% of its tech team, typically a male dominated area.

She says recruiting teams are always diverse and the firm makes sure shortlists of potential new staff or those being considered for promotion are from mixed backgrounds and sexes. It has also had an external audit to make sure the firm pays men and women equally.

In the end, she says changing a lot of “little things” can help address the balance.

“Companies need to own this to change it. I’m not a fan of systems [quotas] but firms need to look at the data and and what they need to do to bring numbers up,” she says.

Next year, when we see whether or not Davos has more female attendees, we’ll have a better idea if that has happened.