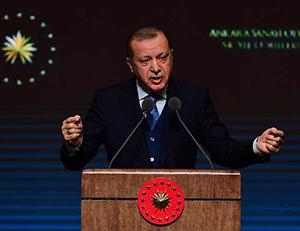 Turkey will “not take a step back” from its operation into Afrin and has an agreement with Russia regarding its military offensive against the People’s Protection Units (YPG) in the northwestern Syrian city, President Recep Tayyip Erdoğan said on Jan. 22.

He was speaking on the third day of “Operation Olive Branch,” during which one civilian in the southern province of Hatay was killed as a result of rocket fire from YPG militants across the border in Afrin.

“The Afrin issue will be resolved. There will be no step back. We have discussed it with the Russians and we have an agreement with them,” Erdoğan told businesspeople gathered for an award ceremony in the capital Ankara.

He reiterated that Turkey’s offensive into Afrin will only be over once objectives are accomplished in the field, “just like the Euphrates Shield Operation” in mid-2016.

Turkey has “no intention of keeping troops in Afrin forever” and will withdraw them when objectives are fully met, the president stressed, vowing that Ankara will never allow the establishment of a “terror corridor” on its borders with Syria.

Referring to the civilian killed on Jan. 22 as a result of mortar fired from Afrin, Erdoğan vowed that “terrorists will pay the price for their attacks on Turkish territory.”

According to security sources, YPG militants in Afrin targeted Hatay with a mortar shell, killing one person and injuring two. The mortar hit the Kaletepe neighborhood of the Kırıkhan district.

Separately, a Turkish soldier was slightly injured in the border district of Ceylanpınar in the southeastern province of Şanlıurfa after being hit by harassing fire from the YPG opened from al-Hasakah, a district that the Syrian Kurdish militia has control over. Another rocket fired from the Syrian city of Afrin struck a Turkish camp where Free Syrian Army (FSA) fighters were located near the border on the same day, killing two people and wounding 12.

Another front opened through Azaz

Meanwhile, Turkey also launched a military operation on Jan. 22 towards Afrin from Syria’s Azaz, the Turkish military announced around noon on the same day, according to the state-run Anadolu Agency.

The move aims at squeezing the YPG from both west and east in order to sweep them towards southern Afrin, further from the Turkish border. Military vehicle reinforcements continued to be made for the border units.

During the operations Turkish troops took control of 11 YPG positions and created “safe zones” in Afrin. The Turkish army, in alliance with the FSA, captured the villages of Shankal, Qorne, Bali, and Adah Manli as well as the rural areas of Kita, Kordo and Bibno and four other hills in Afrin.

Meanwhile, Turkish media outlets have reported that YPG militants in Afrin released a number of Islamic State of Iraq and the Levant (ISIL) militants from local prisons “in order to use them as suicide bombers against the Turkish military operation.”