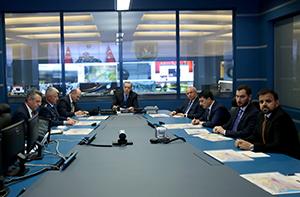 Turkish President Recep Tayyip Erdoğan was updated on Jan. 22 on the progress of Operation Olive Branch by military commanders during a video conference, according to a source at the presidency.

After holding meetings, Erdoğan received information from military commanders in the region on the operation’s third day at the Presidential Complex’s government information coordination center at 11:00 p.m. local time, said the source, who spoke on condition of anonymity due to restrictions on talking to the media.

The president first spoke to Lieutenant General İsmail Temel Metin who is at the operating base in the southern province of Hatay, which borders Syria.

He then spoke with generals at the Turkish General Staff and the Turkish Land Forces’ operating bases.

Erdoğan wished success in the operation in Afrin, while the military informed him their morale was at the highest level.

Erdoğan also connected live to the governors of the border provinces of Hatay, Şanlıurfa, Kilis and Gaziantep about the situation in their cities.