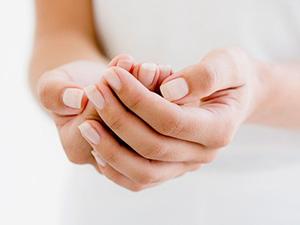 One casual Saturday, I was getting out of the car for a much-needed shopping trip with friends and completely smashed my thumbnail in the car door. When I looked down at my finger, I saw lots of blood and a huge crack across my entire nail. For the next 30 minutes, my friends and I raced around the mall looking for a Band-Aid and some Advil (Note: I’m keeping a First Aid kit in my car from now on).

After the bleeding finally stopped, I was left with a bruised and cracked fingernail. My first inclination was to cover up the ugly wound with a gel manicure. (Yes, that’s my vanity showing.) But it turns out, that is the worst thing to do.

I know I’m not the first person to slam a finger in a car door or jam it in a window, so I talked to the professionals to get the proper to-do list for when you’ve injured your finger or toenail—and, since I’m a beauty editor, the right way to cover up a nail mishap. Here’s what you need to know.

First, assess if a trip to the doctor is necessary.

Most injuries affect the nail plate (the hard part of the nail that grows out), which can crack and potentially fall off, and the nail bed (that’s the skin underneath the nail plate), which can bleed and bruise. When the injury first happens, you need to do a quick assessment. Basic wound care applies here: Put pressure on the area to slow the bleeding, clean the wound with soap and water, apply a bandage, and take an analgesic to help with pain if needed. You can also ice your finger if you’ve got swelling in the area, says dermatologist Ted Lain, M.D.

While you’re doing all this, you want to make sure you still have good blood flow in the area. Press on a portion of the nail or finger that is not injured. If the area turns white and then turns pink within seconds when you release the pressure, you’ve got good capillary refill. That means blood is still flowing. You should also touch the tip of your finger or toe to make sure you still have feeling in the area. “As long as you can feel everything, you probably don’t have any nerve damage,” says Lain. You also want to make sure the skin at the tip of the finger isn’t blue or blanched white—unusual colors are a sign you need to see a doctor.

If there’s damage to the nail bed, examine your nail closely to see how extensive it is. “When the bruise underneath the nail encompasses more than 50 percent of the surface area of the nail, the blood underneath the nail should be evacuated to try and preserve the nail,” says Lain. The doctor can do this easily by drilling a small hole in the nail plate and letting any excess blood drain. This is a procedure that should be left to the professionals. No matter how many times you’ve watched Grey’s Anatomy, you’re not qualified for bloodletting, and you’re putting yourself at risk for infection if you do it yourself.

Some injuries can also affect the nail matrix, which is the tissue at the base of your nail. Those instances might require a trip to the ER or urgent care. This is where all the nail growth happens, and serious damage could cause the nail to grow out strangely for the rest of your life. “If the pressure can be released, then we can feasibly help to control any damage that might happen to the nail matrix,” says Lain.

In the days following the injury, be on the lookout for signs of infection.

“If there is any pus, if it becomes really red and hot after the fact, or there is a lot of swelling, it’s a sign of infection,” says dermatologist Mona Gohara, M.D. “If it’s green, that’s another sign that there is bacteria in there.” There might also be persistent pain that just doesn’t wane. These symptoms are all signs you need to see a doctor. Make an appointment with a dermatologist, primary care physician, or at an urgent care center to get the wound drained and get a prescription for antibiotics.

If you see red streaks on your hand or forearm or you feel feverish or nauseated, it could be much more serious. These are signs that the infection has spread to the bloodstream, which can lead to sepsis. “Sepsis is extremely serious, and anyone seeing the infection worsening with the spread to the hand should seek care at an ER,” says Lain.

And yes, be prepared for your nail to fall off.

After an acute trauma, your nail may turn black and seem like it’s barely hanging on. Please, please, don’t pull it off. You can cut it down, but let the injury grow out on its own. “Leave it alone, because there is new nail growing underneath,” says Lain. “The new nail will push up the old nail, and it will come off when it’s ready.” Sometimes continual trauma (think marathon runners) can also make nails fall off.

Once the nail falls off, it’s a good idea to protect the sensitive skin of the nail bed with a Band-Aid. “If you leave it open to the air, it can get very dry and very cracked, and if it gets traumatized, it can affect how the nail grows,” says Lain.

In some cases, like if the nail bed is infected, the doctor might have to remove the nail by force. This procedure is called a nail evulsion: First, the finger or toe is given a local numbing treatment. Then the doctor uses special tools to lift the nail on each side and peel the plate away from the nail bed. (Kind of sounds like something out of a horror movie, right?)

So what about manicures?

Now, here’s what I really wanted to know: Can I cover a cracked or bruised fingernail with pretty polish while it’s healing? The answer is yes—with a few precautions.

Lain recommends first coating the nail with a layer of nail hardener to help protect the nail plate, and Gohara says nail polish is totally fine if there is just a crack in the nail (once the bleeding has stopped and the injury has had some time to heal, of course).

But both derms say to avoid the nail salon. “If somebody is using scissors and cutting, you can introduce bacteria or fungus, because the nail has already been compromised,” says Gohara. It’s better to stick to DIY manicures until the nail has grown out. Yes, that means putting a pause on your gel manicure habit. “It is not the application of the gel, or the product itself, but rather the removal process that concerns me,” says Lain. “Gel polish is commonly removed incorrectly, leading to a compromise of the nail’s integrity or worsening of underlying damage.”  If your nail is beginning to grow out and snag on fabrics and clothes, Lain says it’s OK to apply a bit of nail glue to keep the nail plate from falling off too soon, since nail glue is formulated to work on skin and nails.

It can take about six months to a year for the damage to grow out.

Toenails grow at a rate of 1 millimeter a month, so it can take a year or longer for a crack on the big toe to grow out completely or for the nail to grow back in if it’s fallen off. Fingernails grow about three times faster, so it could take only six months for a full recovery.