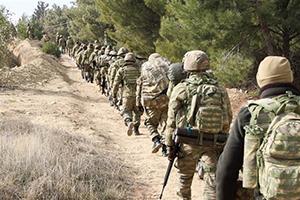 “We hear and take seriously Turkey’s legitimate security concerns and are committed to working with Turkey as a NATO ally,” White House spokeswoman Sarah Huckabee Sanders said at a news conference.

Turkey launched Operation Olive Branch on Jan. 20 to remove the People’s Protection Units (YPG) and the Islamic State of Iraq and the Levant (ISIL) militants from the northern Syrian city.

The operation is to establish security and stability along Turkey’s borders and the region, as well as to protect Syrians from the oppression and cruelty of terrorists, according to Turkish General Staff.

Sanders urged “all parties” to remain focused on defeating Daesh, the Arabic acronym for ISIL, de-escalating the Syrian conflict and protecting innocent civilians, while claiming the Afrin operation distracts from efforts to ensure the lasting defeat of Daesh.

Earlier in the same day, Turkish Chief of General Staff Gen. Hulusi Akar, while inspecting troops in the southern province of Hatay, emphasized that the military operations are to protect Turkey’s rights within boundaries of international law, without harming civilians or property.

He also said that along with the Syrian Democratic Union Party (PYD)/Kurdistan Workers’ Party (PKK) and YPG elements in the region, the terrorist group ISIL is also present.

“We want to ensure that [Bashar] al-Assad’s brutal regime cannot return to Afrin, and we will continue working diplomatically to end the Syrian civil war,” Sanders said, urging Turkey to exercise restraint in its military actions.

His remarks came during a meeting with British Foreign Secretary Boris Johnson in London.

Tillerson said ISIL had been defeated in Syria.

“So we are concerned about the Turkish incidents in northern Syria,” the secretary of state said.

“We recognize and fully appreciate Turkey’s legitimate right to protect its own citizens from terrorist elements that may be launching attacks against Turkish citizens on Turkish soil from Syria,” he added, also urging all sides to show restraint.

Tillerson said he was in talks with Ankara and the leadership of the U.S.-led coalition in Syria, adding that he was hoping to address Turkey’s “legitimate concerns.”