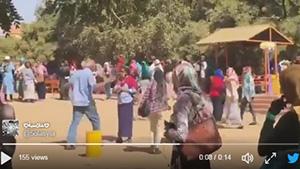 In our series of letters from African journalists, Yousra Elbagir looks at the reaction of Sudanese to a video of a male lecturer assaulting his students, and what it says about the state of women’s rights in the country.

The New Year has started off with a bang in Sudan.

Civil unrest spread like wildfire across the nation. Protests have raged in cities from Khartoum to Port Sudan, sparked by the removal of subsidies, and other economic measures contained in the 2018 budget.

The price of bread and sugar has sky rocketed, the Sudanese pound is in free-fall following its devaluation by the country’s central banks and there is a widespread fuel shortage.

Security forces have been accused of brute force, with dozens of protestors injured and reports of more than 200 detained. One student in West Darfur, Al-Zubair Ibrahim, was even killed.

Despite all of this, one incident has inflamed the popular imagination in Sudan, dominating conversations between family and friends.

Videos have circulated of Gasim Bedri – the prominent president of the first all-women university, Al-Ahfad – physically assaulting protesting female students on his campus on 10 January.

One particularly shocking video shows the university head walking in front of the demonstrating girls, then suddenly diving into the crowd, grabbing one by her headscarf and repeatedly striking her on the head.

While many expressed anger and disapproval of his violent approach, others condoned his actions.

Some incorrectly stated that the video was three years old, in an effort to reduce its impact.

Others said that he simply had the right to do what he wanted on his campus and that the girls needed to be disciplined.

But even in the midst of these justifications, the most shocking reaction came from his own students – who used terms of fatherly affection and claimed that “Baba Gasim” was trying to protect them and was hitting them for their own good.

Some students and parents even argued that the girls were better off being struck by Gasim than running riot and facing violent police outside of the campus walls.

An overwhelming majority of the university’s students and staff have stood firmly in support of his actions.

She told BBC Arabic that the tape “only shows one side of the truth” and that some of the demonstrators were threatening to burn down university buildings over rising food prices in the campus cafes.

After a slew of newspaper interviews in which Mr Bedri used heavily-debated Koranic verses to justify the physical discipline of women, he released an official apology.

His statement read: “I take full responsibility for my actions and I hope there is understanding that my intention was, and will continue to be, to protect my students from any dangers they may face beyond the university’s walls.”

Sudan’s legislation prohibits the physical discipline of girls in the public education system.

Ironically, this is the same system where Babiker Bedri, Gasim’s grandfather, relentlessly fought for women to have a space.

In 1907, he founded the country’s first girl’s school and one of the earliest in the region.

This legacy – one of incredible progress – is not only undermined by the behaviour shown in the video but also by the cracks in its condemnation, both from individuals and the international institutions that support the private university in the name of female empowerment.

This incident and the resulting debate has exposed a contradiction at the heart of Sudan’s storied history of feminine resistance.

That, despite this long and rich history of Sudanese women standing firmly at the forefront of Sudan’s epic uprisings, they are still infantilised in the face of untouchable male authority – whether that entails abuse from a police officer or a so-called “father figure” and “protector”.