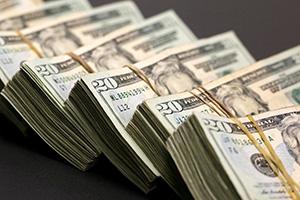 TOKYO (Reuters) – The yen ticked up slightly on Tuesday after the Bank of Japan kept monetary policy unchanged as expected but made tweaks to its views on inflation that some trader say pointed to a slightly less pessimistic central bank view on consumer prices.

The dollar had recovered from earlier losses after U.S. senators struck a deal to lift a three-day government shutdown but it remained mired near a three-year low against a basket of currencies on lingering concerns about its yield advantage being chipped away.

The greenback fell 0.2 percent to 110.74 yen JPY=, edging near last week’s four-month low of 110.19, after the BOJ maintained its policy and its economic and price projections.

The central bank on Tuesday said risks to prices are still tilted to the downside, though it did change its assessment on prices to “stable” from “weak”, a technical tweak to reflect a recent pickup in inflation, which is largely due to rise in oil prices.

“I don’t see anything in today’s announcement that suggests a change in the BOJ’s stance. Rather today’s price action talks more about how the market is preoccupied with the idea that the BOJ will adjust its monetary policy at some stage in the future,” said Minori Uchida, chief FX analyst at the Bank of Tokyo-Mitsubishi UFJ.

The yen has gained after the Bank of Japan trimmed its buying of long-dated government bonds earlier this month, sparking speculation of an eventual exit from its large stimulus.

“Today’s market reaction suggests the market may not ditch this perception easily no matter how clearly BOJ Governor (Haruhiko) Kuroda denies that he is considering policy adjustments,” Uchida added.

”In the near-term, there will be focus on Kuroda’s news conference, which could offer “a more dovish lean”, said Stephen Innes, head of trading in Asia-Pacific for Oanda in Singapore.

The U.S. House of Representatives passed a short-term measure on Monday to fund the federal government through Feb. 8 after it won enough support in the Senate.

Still, a boost from the deal did not last long partly because the measure secured funding for only a little more than two weeks, with the Republicans and Democrats still at loggerheads on many issues.

One reason often cited by traders for the dollar’s climbdown is that its relative yield attraction is at risk as the world’s major central banks are seen winding up their stimulus.

That would change the interest rate dynamics of the past few years, when the U.S. Federal Reserve was the only central bank raising rates.

Expectations that the European Central Bank may withdraw its stimulus gained momentum earlier this month after the accounts of its last policy meeting showed it could shift its policy communication early this year.

But sources have told Reuters the ECB is unlikely to ditch a pledge to keep buying bonds at its upcoming meeting on Thursday.

The British pound GBP=D4 hit its post-Brexit referendum high of $1.4005, helped by optimism that Britain will reach a favorable divorce deal with the European Union.

French President Emmanuel Macron said on Saturday Britain would be able to have a bespoke deal with the European Union after Brexit, one of Prime Minister Theresa May’s objectives.