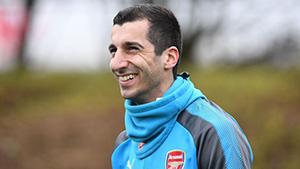 Arsenal manager Arsene Wenger is concerned that Henrikh Mkhitaryan may have suffered a hit to his confidence after a largely-disappointing stint at Manchester United.

The Armenia international joined the Gunners on Monday in exchange for Alexis Sanchez, ending a see-saw 18-month spell at Old Trafford.

Mkhitaryan was a target for Arsenal before he moved to United in the summer of 2016 but he did not settle into the side and was often left on the sidelines by Jose Mourinho.

Now he has a chance to reinvigorate his stalled career in north London and Wenger has backed the 29-year-old to do so following his challenging time with the Red Devils.

“Yes, of course you worry about how much it has affected him,” he said.

“But as well but it’s a new chance for him, what you want in life is a new chance and I’m sure with his quality that he will take it. I met him at the time (he moved to United), at the time we were close but in the end it didn’t work.”

Wenger insists he can incorporate Mkhitaryan, as well as another potential new recruit in Borussia Dortmund striker Pierre-Emerick Aubameyang, into his squad as players will have to accept they cannot play every week.

“Some people need confidence and to feel security,” he said.

“But in football teams, there is a number (of players in a squad) that pushes you, a number that makes you asleep, and a number that paralyses you.

“So you have to find the right number in each squad to give fair competition, but as well not be too much in administration, and not to have no chance at all – no matter what happens – to play.

“Some will have to be in and out. But on the other hand, we have seen that (Aaron) Ramsey has been out injured many times, Jack Wilshere as well.

“We play in many competitions and you have a number you can fit in.”

Wenger went on to suggest he could ask Mkhitaryan, who is cup-tied for Wednesday’s Carabao Cup semi-final second-leg against Chelsea, to play in an unfamiliar role moving forward.

“He can play in different positions,” the Frenchman added.

“But personally I first see him first in a wide position, but I’m thinking about him a possibility to play through the middle.”

Pushed on whether that meant deploying Mkhitaryan as a number 10, Wenger replied: “Or maybe even deeper…”