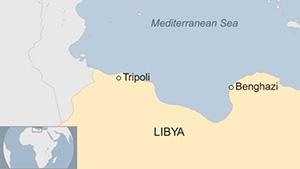 At least 27 people have been killed in two car bombs near a mosque in the Libyan city of Benghazi.

Varying reports say 20 to 30 more were wounded by the blasts, which took place within minutes of each other.

The first vehicle blew up in front of a mosque in the central al-Sleimani neighbourhood, as worshippers were leaving the building after evening prayers.

A second car exploded soon afterwards on the other side of the street.

Both military personnel and civilians are among the victims. The number of fatalities may rise, a spokeswoman for the local al-Jala hospital told AFP news agency.

It is not yet clear who was behind the bloodshed. The BBC’s North Africa Correspondent Rana Jawad says many bombings of this kind go unclaimed in Libya.

A shocking night for Benghazi residents

A video showing the aftermath of the scene of the first explosion has been broadcast by a Libyan channel. You can see the debris outside the mosque, patches of fire, and men in civilian clothes frantically putting lifeless bodies onto the back of a police pick-up truck.

Amid this chaotic scene, we also see a dazed and seemingly injured man sitting amid the debris. Not far away from him are what look like other dead and injured people.

No one has claimed responsibility for this latest attack, but speculation is rife over who could be behind it. Though there have been deadly bombings in Libya in the past, this latest twin attack, with blasts 15 minutes apart, is not a common occurrence there. It appears to have aimed for a high civilian death toll.

Libya has descended into turmoil since the 2011 overthrow of its then-leader Muammar Gaddafi. Two rival parliaments and many powerful militia groups have battled for dominance, and the disruption has allowed the Islamic State group to gain a foothold in the country.

The city of Benghazi has seen conflict between Islamist militias and the self-styled Libyan National Army, headed by military strongman Khalifa Haftar.

Haftar announced the “total liberation” of the city in July 2017, after three years of fighting with jihadists there.

Nonetheless, clashes and violence have continued to plague Benghazi.