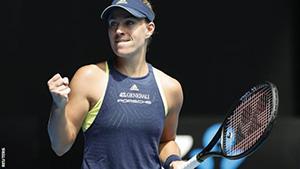 The 30-year-old German was in brilliant form as she beat American Keys 6-1 6-2 on Rod Laver Arena.

Keys, a 2017 US Open finalist, struggled badly throughout, winning only 18 of 46 points on her own serve.

Kerber, the 2016 champion in Melbourne, will play world number one Simona Halep or Karolina Pliskova in the last four.

“Every game was close in the second set, I am just pleased to get through and be again in the semi-finals here,” said Kerber, who, including the Hopman Cup team competition, has won all 14 of her singles matches in 2018.

Keys, seeded 17th, had served 26 aces in her first four matches in Melbourne but did not manage a single one against the 21st seed.

Eight unforced errors in the first three games set the tone as Kerber raced through the first set and established a 3-0 lead in the second.

Keys broke to love to get back on serve at 3-2 but an errant forehand caused to fall behind again and Kerber closed out the victory by breaking the American for the sixth time.