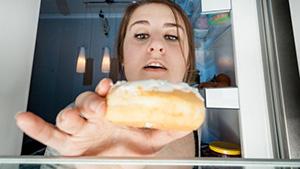 We all know what makes us fat: eating more in calories than we burn off in energy. But though this is true, it doesn’t answer the more interesting question – why do we overeat in the first place?

Why do I sometimes feel compelled to eat that bit of cake or bar of chocolate although I know I am going to regret it a few minutes later?

Is it just greed – or is something else going on?

Although self-control is important, there is mounting evidence that stress plays a significant part in weight gain.

Chronic stress disrupts our sleep and our blood sugar levels. This leads to increased hunger and comfort eating.

And that then leads to further disrupted sleep, even higher levels of stress and even more disrupted blood sugars. In time, this can lead not only to unhealthy levels of body fat, but also to type-2 diabetes.

To see what can happen, Dr Giles Yeo, a member of the Trust Me, I’m a Doctor team, decided, with the help of scientists from Leeds University, to put himself through a particularly stressful day.

The Leeds scientists started by asking Giles to do something called the Maastricht Stress Test.

They put him in front of a computer and made him rapidly subtract a number, 17, from another number, 2,043. He kept making mistakes, which for someone like Giles is particularly stressful.

Then they got him to put his hand in a bath of ice-cold water and hold it there. Before and after these tests, the Leeds team measured Giles’s blood sugar levels.

Our blood sugar levels rise when we eat, and in a healthy person like Giles, they quickly return to normal.

But what the Leeds team found was that on the day when Giles was being deliberately stressed, his blood sugar levels took three hours to return to normal – some six times longer than on a previous, stress-free day.

The reason this happens is that when you are stressed, your body goes into “fight or flight” mode.

Your body thinks it is under attack and releases glucose into your blood to provide energy for your muscles.

But if you don’t need that energy to run away from danger, then your pancreas will pump out insulin to bring those blood sugar levels back down again.

These rising levels of insulin and falling blood sugars will make you hungry – which is why you crave sugary carbs when you are stressed.

The same sort of thing happens when you have a bad night’s sleep.

A recent study carried out by researchers at King’s College, London found that if you sleep-deprived people they would consume, on average, an extra 385kcal per day, which is equivalent to the calories in a large muffin.

Children also get the munchies when they haven’t had enough sleep.

In another recent study, researchers took a small group of three- and four-year-olds (all regular afternoon nappers) and not only deprived them of their afternoon nap, but also kept them up for about two hours past their normal bedtime

The following day, the children ate 20% more calories than usual, particularly more sugar and carbohydrates. They were then allowed to sleep as much as they wanted.

The day after that, they still consumed 14% more calories than normal.

So how can you reduce daily stress?

Here’s a breathing technique, recommended by NHS Choices, which I find effective. You will get the most benefit if you make it part of your daily routine.

You can do it standing, sitting or lying – whatever is the most relaxing.

One of the first things I would strongly recommend is to try to get a good night’s sleep. This is easier said than done, but NHS Choices provides some useful tips.

You could also try some well established “stress-busting” techniques – such as exercising, gardening, mindfulness or yoga.

When I recently tested them, with the help of Prof Angela Clow, a stress expert from the University of Westminster, the mindfulness came out on top.

But a key finding of our study was you really only got benefit if you enjoyed it.

So do try different things and see which works best for you.

Trust Me I’m a Doctor is on BBC Two at 20:30 on Wednesday 24 January and will be available on iPlayer afterwards.