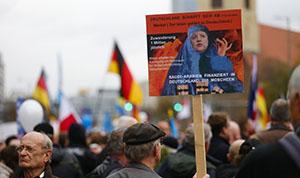 Three recent incidents seem to highlight a quirk of sociology.

Last fall, Arthur Wagner was part of something remarkable: His political party, the anti-Islam, anti-immigrant Alternative für Deutschland, entered the Bundestag, becoming the first far-right party in the body since the 1950s. This year, Wagner has done something even more remarkable: He has converted to Islam and left AfD.

Wagner was a leading party official in the state of Brandenburg, and had been a representative since 2015. Deutsche Welle drily noted that Wagner is of Russian origin and “was a member of the state committee with responsibility for churches and religious communities.” A party spokesman told the paper his departure was personal. “The party has no problem with that,” the spokesman said of the conversion. Still, one can imagine his new religious identity would create some awkwardness with his old chums. AfD has, for example, used the slogan “Islam does not belong to Germany.”

Even stranger, Wagner is not the first person to leave a far-right, anti-Islam party in Europe and become a Muslim. Arnoud van Doorn, a member of Geert Wilders’s Dutch Freedom Party—which is another far-right, anti-Islam party—left it in 2011, converted to Islam in 2012, and soon after made hajj, the pilgrimage to Mecca Muslims are obliged to make at least once in their lifetimes. And in 2014, Maxence Buttey, a local councillor for the National Front (FN), France’s analogous far-right party, converted to Islam and was suspended from the party committee.

In the United States, a grisly story made headlines last year when an 18-year-old former neo-Nazi in Tampa who said he had converted to Islam confessed to killing two (apparently still) neo-Nazi roommates, though that case is so grotesque, and the use of violence so far from mainstream Muslim practice, that it defies comparison to the European examples. (The suspect also shouted a nonsensical, non-Muslim phrase.)

In all cases, the shift from anti-Muslim to Muslim is counterintuitive. One potential factor is the ease of conversion to Islam. One can declare oneself a Muslim after uttering the shahada, with no requirements like the baptism or confirmation needed to become Christian or the process and certification used in Judaism. Someone can announce they are a Muslim without demonstrating any particular devoutness, longevity of commitment, or knowledge of the religion’s precepts. This is not to say than any given convert is not sincere, but that stating someone has converted to Islam doesn’t really clarify much on its own.

These cases of anti-Muslim activists in Europe converting to Islam don’t represent a trend, but there are enough of them to wonder what might inspire such apparently 180-degree turnarounds. When he converted, Buttey, the FN councillor, argued that the far-right movement had more in common with the religion than its members realized. “Both are demonized and very far from the image portrayed in the media,” he told Le Parisien. “Like Islam, the FN defends the weakest. The party denounces exorbitant interest rates charged on the debt of our country, and Islam is against the practice of usury.” It’s hard to imagine many French Muslims accepting a kinship with the FN, but in any case a more fruitful direction might be not to look for what far-right parties share with Islam but rather what forces might attract members to both.

There seem to be some people who are joiners, eager to become part of larger groups. Almost everyone will know someone like this, perhaps someone who is constantly searching for new social groups or joining new organizations, or perhaps even a spiritual seeker-type who flirts with a succession of faiths. The cliche about the “zeal of the convert” exists for a reason.

According to Michael Hogg’s uncertainty-identity theory, people seek to reduce questions about who they are, where they fit in the world, and how people view them. “One way to satisfy this motivation is to identify with a group (a team, an organization, a religion, an ethnicity, a nation, etc.) a process that not only defines and locates oneself in the social world but also prescribes how one should behave and how one should interact with others,” Hogg writes.

Far-right (as well as far-left) political groups benefit from people struggling with such questions. “Extreme groups … have precisely the properties that are ideally suited to reduce self-uncertainty because they provide a clear and unambiguous sense of self and place in the world,” Hogg and Janice Adelman write in a 2013 paper.

This explains why people like Wagner, van Doorn, and Buttey ended up in the constellation of far-right European parties. One might expect that the brand of Islam they would take up would also be radical—and perhaps even tip over into violent jihadism. As my colleague Julia Ioffe wrote in the aftermath of the white-supremacist violence in Charlottesville, Virginia, in August 2017, the forces that draw people (and especially young men) to extreme movements are almost identical, even though political discourse separates them. “The process and structure of radicalization and extremism are the same in different kinds of movements, even when the content of the extremist belief is different (such as with neo-Nazis and jihadists),” J.M. Berger, a fellow with the International Centre for Counter-Terrorism in The Hague, told Ioffe.

But it doesn’t necessarily happen that way. Hogg and Adelman note that extreme groups present various disadvantages for joiners as well. “People are unlikely to be strongly attracted to them unless uncertainty is relatively chronic, pervasive, or acute, or they have few other viable identity options (see below),” they write.

Mainstream, non-violent Islam can provide many of the same benefits without the social disadvantages. In general, Hogg and Adelman argue that the best venues for reducing uncertainty are “distinctive and well-structured groups that have clear boundaries and membership criteria, and consensual and prescriptive attitudinal and behavioral attributes grounded in a relatively homogeneous world view.” Hence associating oneself with Islam—especially in the context of Western Europe, where Christian cultural identity has suffused society for centuries, and where Islam is relatively marginalized—offers just such a group. Islam is distinctive, it has clear membership criteria and boundaries (one either is or is not a Muslim), and prescribes attitudes and behaviors. (Compared to a political party or to mainstream Christianity, Islam is relatively non-hierarchical.) Importantly, however, taking up fundamentalist Christianity would present a similar payoff for the “convert.”

The idea of far-right critics of Islam converting seems to be new in history, in part because far-right, anti-Islam parties are a new phenomenon. In earlier ages, all of European politics would have been fairly anti-Islam, while there would have been little proximity to actual Muslims or opportunities to mix with them. The rise of the internet, which can facilitate radicalization, also gives joiners easier ways to learn about new identities. There are older cases of Quran skeptics, like the French surgeon Maurice Bucaille, who have converted. (Bucaille became an advocate of the idea that the Quran is scientifically perfect.)

For the recent crop of converts, trying on a new identity does not necessarily mean a new personality. Van Doorn, for example, has since his conversion transferred his vitriol toward Jews, making anti-Semitic comments that he passed off as jokes. He was also convicted in 2014 of selling drugs to minors and other offenses; he claimed he was conducting a sting, but a court rejected the excuse. Van Doorn, in other words, seems to have traded one form of charlatanism for another. This should not come as a surprise, though. His change of religion, and those of Wagner and Buttey, say more about the men themselves than they do about either far-right politics or Islam.