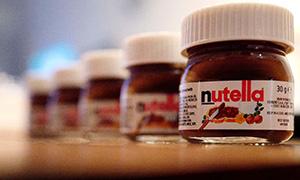 Police have reportedly been called to supermarkets in France after a 70% discount on Nutella sent shoppers into a frenzy.

The discount, applied by the Intermarché chain, reduced the price of the chocolate hazelnut spread from €4.50 to €1.40.

The resulting scenes in some Intermarché stores were likened to riots. Footage from inside several shops showed chaos as shoppers swarmed around the shelves while staff tried and failed to control them.

In one video posted on Twitter, stunned bystanders declare “ce n’est pas normal” as they watch the scrum.

In one shop an employee reportedly got a black eye after attempting to separate warring customers. In another, shelves were emptied in 15 minutes.

“They are like animals. A woman had her hair pulled, an elderly lady took a box on her head, another had a bloody hand. It was horrible,” one customer at the Rive-de-Gier supermarket in central France told Le Progres newspaper.

Staff at a branch in the Loire department told the paper that the sale was “a catastrophe”. “We need another system,” an exasperated employee said at a different store.

The Local reported that police were called in Ostricourt in northern France, where a fight had broken out.

Elsewhere, stores were forced to implement a limit of three pots per customer to keep the peace.

The French are famous for their love of the spread, but it is popular across the world. On its website, the company proudly proclaims that the amount of Nutella produced each year is equal to the weight of the Empire State Building.