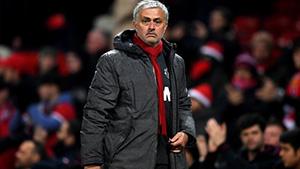 Manchester United manager Jose Mourinho has signed a contract extension until 2020, with the option of a further year.

The 54-year-old’s previous deal at Old Trafford was due to expire in 2019.

Mourinho said he was “delighted” that United “feel and trust that I am the right manager for this great club for the foreseeable future”.

“I feel a privileged one to work with such a fantastic group of boys,” he added.

“My initial contract was three years, we made now the decision to make it clear for everyone that it is not for three, it is for four or five, and who knows, more.”

Mourinho, appointed as Louis van Gaal’s successor in May 2016, won the EFL Cup and Europa League in his first season.

This season United are second in the Premier League, behind runaway leaders Manchester City, with the club still in the Champions League and FA Cup.

“We have set very high standards – winning three trophies in one season – but those are the standards I expect my teams to aim for,” the Portuguese said.

“We are creating the conditions for a brilliant and successful future for Manchester United. I love my players and it is a pleasure to know that we are going to be together for at least the next three years.”

Woodward praised Mourinho for his “exceptional work rate and professionalism”, as well as for “embracing the club’s desire to promote top-quality young players”.

He added: “He has brought an energy and a sense of purpose to everything that he does and I am sure that will continue to bring results for the fans and the club.”

What did I say to convince Sanchez? Nothing – Mourinho

Speaking at his news conference earlier on Thursday – before his new contract was announced – Mourinho hailed the club’s recent signing of Alexis Sanchez from Arsenal.

He said the Chilean had moved from a “fantastic club to a giant club” in the swap deal that saw Armenia midfielder Henrikh Mkhitaryan head the other way.

Mourinho said it was “a great deal for everybody” and confirmed Sanchez will be in the squad for United’s FA Cup fourth round tie at Yeovil on Friday.

The match will be shown live on BBC One and the BBC Sport website.

If Mourinho does stay at United until 2020, it will be his longest single spell in charge of a team.

The former Porto, Chelsea, Inter Milan and Real Madrid boss spent three years at Stamford Bridge between 2004 and 2007, returning for a second two-year period between 2013 and 2015.

Other than Sir Alex Ferguson and Sir Matt Busby, who spent nearly 27 and 24 years in charge respectively, United’s longest serving post-war manager is Ron Atkinson, who was manager for five years and five months before making way for Ferguson in October 1986.