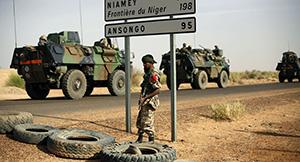 The US military has announced an investigation of a set of images that purportedly are screenshots from video taken of the infamous Daesh ambush in Tongo Tongo, Niger, that left four American and four Nigerien troops dead.

The visuals, which were revealed via Twitter on Wednesday, supposedly depict one of the killed American soldiers. The Twitter account, belonging to one “Mohammed Mahmoud Abu Maali,” claimed that he received the footage from the Daesh affiliate that has claimed responsibility for the attack, the Islamic State in the Greater Sahel (ISGS).

“The video shows one side of the attack, the American dead, some photos were shot by an American soldier, but ISIS [Daesh] took them after the photographer was killed,” Maali wrote, according to the Military Times.

US Africa Command (AFRICOM) issued a statement on Thursday that they were “reviewing the post and determining the veracity of the tweet and the assertions that there is an associated video.”

“We cannot comment further on this issue, or the ongoing investigation related to the Oct. 4 ambush until the investigation is complete.”

The unverified photo and video could prove to be useful evidence in the US ongoing investigation of the deaths of Staff Sgts. Bryan Black, Jeremiah Johnson and Dustin Wright and Sgt. La David Johnson, the four slain US soldiers.

One other video is known to exist from the ambush, of the militants planning the attack before it happened. “It says ‘if we capture them, what are we going to do with them?’ One of them says, ‘we’ll decapitate them,’ another guy says ‘we’ll fight them with weapons,'” said retired Lieutenant Colonel Rudolph Atallah on behalf of ABC.

The October 4 ambush occurred near the village of Tongo Tongo along the border between Niger and neighboring Mali, about 120 miles from the Nigerien capital of Niamey. A dozen US soldiers were accompanying 30 Nigerien soldiers in a sortie searching for a local Islamic militant, although the Pentagon has refused to disclose the specifics of the US mission.

The militants sprang an ambush on the US-Nigerien troops, opening fire on them with machine guns and destroying their vehicles with rocket-propelled grenades. The battle ended when French air support stationed in Mali arrived, sending the militants into retreat.

ISGS is thought to be a new offshoot of the broader network of Daesh affiliates, with the group’s leadership in the Middle East acknowledging them as such in October 2016. They claimed responsibility for the Tongo Tongo ambush earlier in January.

Roughly 800 American soldiers are stationed in Niger, running training, support and drone missions out of the capital of Niamey. Their mission is to aid in the quest to “defeat violent extremism in Africa” and respond to the “global threat with foreign fighters,” according to US Chairman of the Joint Chiefs of Staff Gen. Joseph Dunford in October.

One thing they are not authorized to do is enter firefights except in self-defense or expose themselves to situations where there is a high probability of enemy action, so it’s possible then that the 12 American soldiers were acting outside the scope of their rules of engagement.