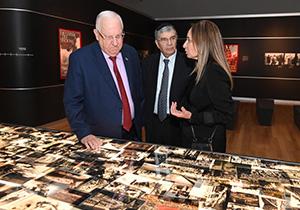 “The State of Israel came into being from the right of the Jewish people to self-determination in its own homeland.”

President Reuven Rivlin is not a lone voice in the wilderness when he insists the creation of the State of Israel was not compensation for the Holocaust.

He is supported in this belief by Prof. Dina Porat, the chief historian at Yad Vashem.

Rivlin was speaking on Thursday to foreign diplomats who braved the inclement weather to attend the annual International Holocaust Remembrance Day event for the diplomatic corps at Yad Vashem in Jerusalem.

Rivlin noted that his own family came to the Land of Israel well over a century before the Holocaust and said other Jewish families were already living here long before the arrival of his own ancestors. “The State of Israel is not a colonial project, and not compensation for the Holocaust,” he declared. “The State of Israel came into being from the right of the Jewish people to self-determination in its own homeland.”

Porat, in a video presentation, explained how Holocaust denial can be manipulated to delegitimize Israel’s existence. She said former Iranian president Mahmoud Ahmadinejad denied the Holocaust ever happened as a pretext for saying if there was no Holocaust there was no legitimacy for the State of Israel.

As we near #InternationalHolocaustRemembranceDay 73 years since the fires of the Auschwitz crematoria were extinguished. Remembrance alone is not enough. We must not give in to anti-Semitism. We must fight against anti-Semitism, even when it hides as anti-Israel. @yadvashem pic.twitter.com/xMdky5koBd

The video included an address by American Holocaust researcher Prof. Alvin Rosenfeld. Rosenfeld, who said he had been a good friend of Elie Wiesel, who admitted to being mistaken in predicting he would not see antisemitism again after the Holocaust. “Virtually everyone was wrong,” said Rosenfeld. “I never expected to become a scholar of post-Holocaust antisemitism. It’s real and it’s urgent.”

Rivlin in his address referred to current antisemitism, racism and neo-Nazism. “In this environment, Jews feel threatened in the countries in which they live and some feel the need to hide their identities,” he said.

After the Holocaust, he recalled, there was a commitment to “Never again,” and only a few years ago did the United Nations take the important decision of designating International Holocaust Remembrance Day on the anniversary of the liberation of Auschwitz.

But remembrance is not enough, Rivlin underscored. “We must fight this new antisemitism.”