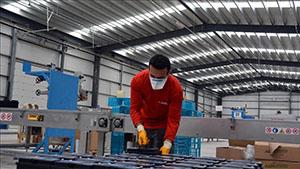 Construction sector confidence index rose by 6.7 percent to 87 points in January from 81.6 in December 2017.

The surge “stemmed from the increased numbers of managers evaluating ‘current overall order books’ as above normal for the season and expecting an increase in ‘total employment’ over the next three months,” TÜİK stated.

The services sector index increased 6 percent to 102 in the month from 96.2 in December 2017, according to TÜİK, as more managers saw the business situation and demand (turnover) increase over the past three months along with an expected improvement in demand (turnover) compared to previous months.

The retail trade confidence index was also up 6 percent month-on-month to reach 106.2 points in January.

The figures come after TÜİK reported on Jan. 23 that consumer confidence in the Turkish economy also rose in January.

The consumer confidence index jumped 11.1 percent in January, to 72.3 points, from 65.1 in the previous month, according to the report.

Official data showed that the downward trend in consumer confidence that started in August 2017 ceased in January 2018.

Turkey’s overall economic confidence index is set to be announced by TÜİK on Jan. 30.