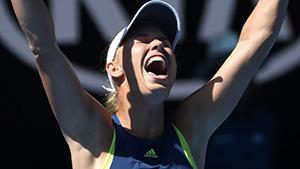 Simona Halep and Caroline Wozniacki will do battle in the Australian Open final on Saturday with a first grand slam title and the world number one ranking at stake.

After Wozniacki withstood a major wobble with the finish line in sight to beat Elise Mertens 6-3 7-6 (7/2), Halep defeated title favourite Angelique Kerber 6-3 4-6 9-7, with the third set a battle of lung-busting brilliance.

The final will be a clash between the top two seeds who share more than simply proximity in the rankings. Both have been ranked number one without winning a slam, both lost their first two finals and, heading into the second half of their careers, both know they may never get a better chance.

Cynics would call it the desperation derby, and whichever player handles the occasion better is very likely to come out the winner.

Halep achieved the bigger result in the semi-finals, beating the form player of 2017, former Melbourne champion Kerber, who went into the clash on a 10-match winning streak.

It pitted two of the best athletes and counter-punchers on the women’s tour against each other, so long rallies seemed to be a given, yet after 13 minutes the score was 5-0 to Halep.

But Kerber mounted a comeback, winning three games in a row, before Halep broke serve again to take the set.

The Romanian has made no secret that her sole focus now is on winning a slam title, but Kerber clung on by her fingernails in the second set, recovering from 1-3 and then saving break points that would have given Halep a 5-3 lead.

She got her reward with three games in a row to take the set as Halep’s belief wavered and then broke to start the third with an extraordinary point that was a taste of things to come.

Halep looked to have made the decisive breakthrough when she opened up a 5-3 lead but Kerber broke back, ending the final titanic point on her knees with her head pressed to the court.

A pinpoint HawkEye challenge gave Halep two match points in the next game but Kerber saved them both and then gave herself the chance to serve for victory at 6-5. She got to 40-15 but now it was Halep’s turn to dig in and hang on.

They were the fourth and fifth match points the Romanian has saved this tournament after she withstood three in another remarkable battle against Lauren Davis in round three.

Halep said: “It definitely was very tough, I’m shaking, I’m very emotional. She’s a very tough opponent. I’m really glad that I could resist and I could win this match. I have just to enjoy.

“I had just confidence in myself. I decided after I twist my ankle (in the first round) that I will fight for every point in this tournament and then I will rest. I didn’t give up, not even a ball. If you don’t give up you can win the match in the end. I did it and I’m really proud of myself.”

All seemed to be going smoothly for Wozniacki against surprise package Mertens in the first match until she served for the match at 5-4 in the second set and from 30-0 lost four straight points, double-faulting on the last of them.

Wozniacki then had to save two set points but, seven years after holding match point in the last four here against Li Na and losing, she engineered a different outcome.