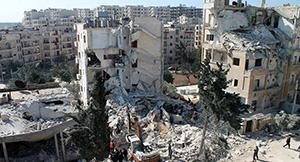 A mere week after volatility in Turkish equities climbed to a 13-month high as investors fretted about an anticipated military strike on Syria, traders appear to have set aside their concerns as they snap up Istanbul stocks.

The benchmark Borsa Istanbul 100 Index has gained 4.4 percent since Monday and is headed for its best week since July, buoyed by relatively muted reactions to Turkey’s cross-border offensive and a continued appetite for emerging-market assets.

The long-term implications of Turkey’s military action on its relations with the U.S. are hard to assess and the immediate impact on the economy is seen as limited, which is why the issue has faded from being top of mind for investors, said Gulsen Ayaz, head of institutional sales and trading at Deniz Invest in Istanbul. “Traders rather wanted to take advantage of the buoyant equity sentiment globally and attractive valuations on Turkish stocks.”

Turkey began an offensive against U.S.-backed Kurdish militants in northwest Syria last weekend, defying a warning from President Donald Trump. The trigger for the incursion was the U.S.-led coalition’s plan to establish a new armed force against Islamic State near Turkey’s border in northern Syria, controlled by Kurdish fighters, which the government in Ankara considers a separatist threat.

Turkey’s military confrontation raised the risk of further escalating tensions with the U.S. A top White House official warned on Thursday of “grave consequences” from any miscalculation by Turkish forces. The two allies risk facing-off over the Syrian town of Manbij, said Ilnur Cevik, a chief adviser to Turkish President Recep Tayyip Erdogan.

For some money managers, it’s just another day of the political noise they are accustomed to:

“There seems to be permanent tension, verbal or actual, in this region, so you get used to it,” Ekaterina Iliouchenko, a fund manager at Union Investment Privatfonds GmbH in Frankfurt, said by email.