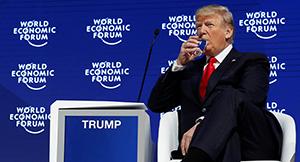 On Friday, US President Donald Trump made his grand entrance at the World Economic Forum in Davos, Switzerland, and offered audience members an outline of America’s economic future.

Trump’s speech doubled down on his policy of America First, but also indicated that “leaders of other countries should put their countries first,” too.

“[The US will no longer] turn a blind eye to unfair economic practices, including massive intellectual property theft, industrial subsidies, pervasive state-led economic planning,” POTUS said. “We cannot have free and open trade if some countries exploit the system at the expense of others.”

He later added that “America is open for business and we are competitive once again.”

But was 45 just playing to his audience?

​Speaking to Sputnik Radio’s Loud & Clear, Patrick Lawrence, the author of “Time No Longer: Americans After the American Century,” definitely thought so.

“All politicians play to their audience,” Lawrence said. “What I like about this speech is… that people are listening to Trump to see what he has to say.”

“Is he coming closer in on globalization? Probably, but I think he authentically wants to make a difference,” the author added.

When asked if Trump’s speech was just an attempt to “kiss up to Davos elites,” Lawrence said it could be possible, but that Trump also cares about participating in agreements that benefit Americans.

“I think those who held expectations that Trump was going to follow through with some grand confrontation with corporate capital [need to adjust their view of the situation],” he told show hosts Brian Becker and John Kiriakou. “The scales need to drop… that was never really going to happen.”

“Trump has harped on this question of American manufacturing jobs for decades,” Lawrence added. “Most press people writing about him don’t care enough or dont read enough into the history of that… but he’s quite sincere about [promoting America].”