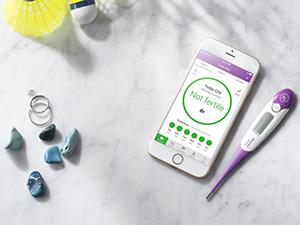 When news broke last week that 37 people who relied on an app for birth control had unintentionally become pregnant, it was hard not to respond with, “Well, duh.”

But the truth is that sexually active folks everywhere are looking for cheap, easy-to-access forms of contraception, so an app that helps you prevent pregnancy sounds fantastic. But is it as effective as other methods?

The Natural Cycles app, founded in 2013, claims to accurately and effectively prevent pregnancy.

So how does it work? Natural Cycles uses an algorithm based on your basal body temperature to calculate when you’re at your most and least fertile. To use it properly, you’ll need to take your temperature every morning and log it in the app. You can also track your menstrual cycle through the app and buy an optional ovulation test to use with it. Based on your information, the app gives you red days (when you may be fertile) and green days (when you are not fertile). With this information, you can either abstain from sex or use another method of birth control (like condoms) on days when you could be fertile.

Although the Natural Cycles website differentiates their method from natural family planning, they operate on similar assumptions. Natural family planning refers to a range of fertility awareness-based methods, which rely on tracking and predicting when you’ll ovulate, because you’re most likely to become pregnant a few days before and one day after ovulation. The idea is to pinpoint the time you’re most fertile to determine when to abstain from sex or use a barrier method (like condoms) to prevent pregnancy.

There are a few different types of fertility awareness-based methods. Some just involve tracking your cycle to estimate when you ovulate (when the ovary releases an egg into the fallopian tubes). In addition to tracking your menstrual cycle, some methods require you to track the changes in your cervical mucus or your basal body temperature (as Natural Cycles does), which can make the method more accurate. But they all come with some level of risk, since it’s hard to know for sure when you’re ovulating each month.

Earlier this month, Swedish news agency SVT reported that 37 women who sought abortions at a large hospital in Stockholm between September 2017 and the end of the year reported using Natural Cycles as their main form of birth control.

While we don’t know for sure why the app failed in these cases (or if the people were really using it—or using it properly—when they became pregnant), doctors at the hospital told SVT that they reported the app to the Medical Products Agency, the Swedish government agency responsible for regulating medical drugs and devices. Although the app has received the necessary regulatory approval from the EU, it has not been approved by the Medical Products Agency or the FDA.

“No contraception is 100% effective, and unwanted pregnancies [are] an unfortunate risk with any contraception,” Natural Cycles tells SELF in a statement. “At first sight, the numbers mentioned in the media are not surprising given the popularity of the app and [are] in line with our efficacy rates. We have initiated an internal investigation with our clinical department in order to confirm this. As our user base increases, so will the amount of unintended pregnancies coming from Natural Cycles app users, which is an inevitable reality.”

“We’d like to reassure the medical community and the public that Natural Cycles is an effective, clinically proven form of contraception, which hundreds of thousands of women worldwide trust as their birth control to prevent or plan a pregnancy,” the statement continues. “Our goal is to increase contraceptive choice so that all women find a suitable method of contraception.”

One big problem with fertility awareness-based methods is that your cycle may naturally (and unpredictably) vary from month to month.

These methods are most effective if your cycle is generally the same every month, and there are a ton of totally normal reasons why your cycle might not be 100 percent regular. “Occasionally you have a 23- or 24-day cycle—it just happens,” Mary Jane Minkin, M.D., an ob/gyn at Yale-New Haven Hospital tells SELF. And if you’ve just come off of hormonal birth control, for instance, it might take a few cycles to get back to your “normal” rhythm. Health conditions such as thyroid disorders and PCOS can make your period irregular, too.

But even if your cycle is super normal, the method isn’t foolproof. “Even if you do this for 10 months running and you know exactly when you ovulate, in month 11 you might ovulate early,” Dr. Minkin says. That’s a problem because it throws off your “safe window” of when you can have sex without worrying about getting pregnant.

Taking into account other factors like your basal body temperate can help, but you have to measure it first thing in the morning, every single morning. “Before you get out of bed, before you even pee,” Dr. Minkin says. That’s a lot to ask for some people.

Using a fertility awareness based-method to prevent pregnancy is definitely better than nothing. But it’s not your only hormone-free option.

The efficacy rates associated with Natural Cycles seem promising, but—as with any birth control method—whether or not it’s right for you will depend on several factors. You’ll want to talk to your doctor about your menstrual cycle, your medical history, and your risk of sexually transmitted infections (the app will not help you prevent STIs). They’ll be able to better explain your cycle and give you an idea of how risky it would be for you to rely on fertility awareness apps as birth control.

If you’re someone who isn’t necessarily trying to become pregnant right this second but it wouldn’t be The Worst Thing Ever if you did, Dr. Minkin says fertility awareness may be totally fine for you. “But if you don’t want to take hormones and you don’t want to get pregnant, I have great methods,” Dr. Minkin says, specifically referring to the copper IUD, which has an effectiveness rate of over 99 percent and stays in place for at least 10 years without you even having to think about it.

“A method that doesn’t require any adherence, like an IUD or implant, is much more effective than methods that require adherence, like even the pill,” James Trussell, Ph.D., professor emeritus of economics and public affairs at Princeton University, tells SELF.

And there are always options like condoms, diaphragms, and sponges that you can use with each other or alongside fertility awareness to further decrease the chances that you’ll get pregnant without the use of hormones, Dr. Minkin says.

But if, after all of this, you’re set on using a fertility awareness-based method, Dr. Minkin suggests looking into ovulation monitoring kits. These track the level of leutinizing hormone (LH) in your urine, which is what triggers the ovary to release the egg. The kits aren’t perfect, but they will make your overall estimates a little more accurate. However, they can also be pretty expensive and you may have to stock up on test sticks every month. So, depending on your situation, that might not be super cost effective or realistic.

So, if you have questions about your chosen method of contraception—or you’d like some help choosing one—check in with your ob/gyn. They can walk through your options and work through your priorities to help you get some without getting too much.