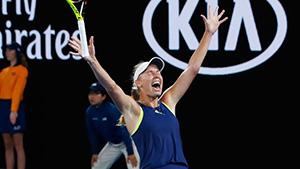 Caroline Wozniacki won her first grand slam title at the 43rd attempt with an emotional victory over Simona Halep at the Australian Open.

Wozniacki’s 7-6 (7/2) 3-6 6-4 triumph, which was fittingly hard won, also means she will overtake Halep as world number one exactly six years since she last held top spot in the rankings.

“This is a very emotional moment. It’s been an incredible two weeks.

“I want to thank my team, my dad. You’ve stood by me every step of the way.

“Thank you everyone for coming out today, it’s been a special moment.”

A teenage prodigy, Wozniacki’s career has been a story of perseverance, with only three players taking longer to win their first title. But now, nearly a decade after she reached the first of two finals at the US Open, the 27-year-old can finally call herself a grand slam champion.

While this was a great moment for Wozniacki, it was a crushing one for Halep, who was also playing in her third slam final after twice losing in the French Open decider.

The key lesson both women have learned in their years of knocking on the door is that grand slam titles have to be won with bravery and belief.

Both had to show those qualities on their progress through the draw, with Halep becoming the first player in the Open era to reach a slam final having saved match points in multiple matches, while Wozniacki recovered from 1-5 15-40 against Jana Fett in round two.

? The rise and fall and rise of Caroline Wozniacki!

There was certainly nothing passive about Wozniacki as she stormed into a 3-0 lead, Halep simply unable to deal with the Dane’s backhand down the line.

She was virtually flawless until she served for the set at 5-3, when the nerves kicked in and Halep broke back. But Wozniacki stepped things up again impressively in the tie-break and this time did not blink.

This was already new ground for Wozniacki, who had never previously won a set in a slam final. She looked determined not to let her momentum slide but Halep, whose marathon matches appeared finally to be catching up with her, dug in with grit to save four break points in the third game of the second set.

Two games later she called for the doctor and had her blood pressure checked, with the hot and humid conditions sapping the strength she had left.

However, it was Wozniacki who showed the first sign of weakness in the set, her forehand losing its penetration as Halep broke for 5-3 despite appearing close to cramping.

Wozniacki had three chances to break back but Halep’s tournament has been characterised by an absolute refusal to be beaten and, with the carrot of a 10-minute break with the heat rule in effect, she battled across the line.

The final set was a mental and physical examination for both. Wozniacki led 2-0 and 3-1 but both times Halep battled back and, when she broke for 4-3, the momentum seemed to be with the top seed.

But Wozniacki took a medical time-out to have her left knee strapped and promptly turned the match around again. A sublime point, showcasing her defensive and offensive skills, set up match point, and this time Halep had no resistance left.