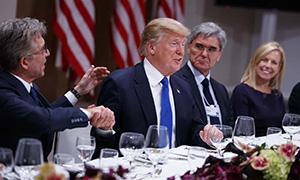 Overshadowed by Trump and the Presidents Club scandal, could Davos have outgrown itself?

Businesses are learning to live with Trump

A year ago, the global elite was still in shock after the US presidential election. Many business leaders had planned to leave WEF early to fly to Washington for Hillary Clinton’s inauguration, rather than to watch Trump take oath of office.

What a difference a year, and a massive tax cut, makes.

Trump confirmed that the way to a chief executive’s heart and mind is through their wallet, when he got 15 European business leaders to join him for dinner. Fawning was on the menu alongside grilled beef tenderloin, as several bosses expressed their gratitude for the president’s tax cut and policy of deregulation.

The corporate world seems happy to suppress any concerns over Trump’s wider behaviour. It may not like what he says, but it likes what he’s doing.

Social media in the dock

The days of kowtowing to Facebook, Google and Twitter are over. Social media was kicked from one end of the Davos promenade to the other this year, chastised for failing to control extremist content and for hooking young people onto an unhealthy diet of updates, selfies and likes.

George Soros launched the most stinging attack, saying social media giants were exploiting the social environment and undermining democracy. Hours earlier, Theresa May had lashed out at them for giving a helping hand to terrorists and child abusers.

Time really is up for sexual harassment

News of the sordid behaviour at Britain’s Presidents Club charity dinner filtered up to the Davos ski resort slowly (perhaps delegates had another president on their mind). But as the Financial Times’s report did the rounds, business leaders visibly blanched at the details of groping and sexual harassment and quickly checked the guest list to find out whether any of their employees had been in attendance.

The previous evening, Canada’s Justin Trudeau had called for a “critical discussion” on women’s rights and equality. His speech resonated through the hall, but what really shook business chiefs was the possibility their firm had been on the Presidents Club invite list.

Malala Yousafzai told WEF that women must “raise up their voices” to end harassment, and business chiefs seemed to be listening.

Education must be reimagined to handle AI

World leaders fear that millions of old economy jobs will be crushed by the fourth Industrial Revolution, while business leaders fret that workers won’t have the skills needed for the new technology age.

So what’s the solution? The word on the WEF floor is that education needs a major shake-up. The Lego Foundation chief, John Goodwin, warns that too many countries are still using education practices “established at the time of our grandparents”. That could be disastrous, with data showing two-thirds of primary children will go into jobs that don’t even exist yet.

The theme of this year’s annual meeting was “Creating a Shared Future in a Fractured World”. But WEF itself felt pretty fractured this year.

That’s partly thanks to the extra kerfuffle created by Trump, who overshadowed events at Davos even before he landed. But even before then, the flaws in holding a gathering of world leaders and business chiefs in a tiny ski resort were painfully obvious.

Even when it runs smoothly, Davos is a wild cocktail of keynote speeches, top-level meetings and intimate sessions. “I’m constantly feeling Fomo – fear of missing out,” joked one senior UK delegate. Add to that the worst snow in decades, which brought the already glacial traffic to a complete halt, and you start to think that Davos has outgrown Davos.