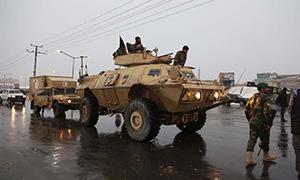 Fresh attack by militants feared after a week of renewed violence

Explosions have been heard near the military academy in the Afghan capital of Kabul, according to reports.

Kabul resident Mohammad Ehsan said the explosions began near the city’s Marshal Fahim national defense university at around 5am (0030 GMT) on Monday morning and lasted for at least an hour. Smaller blasts at less frequent intervals could still be heard, he said.

A Kabul police spokesman confirmed an incident inside a military facility near the university but said it was not yet clear if it was an attack by insurgents or was an internal military issue.

But an Afghan security source told Agence France-Presse news agency that an attack was under way and some of the attackers had been killed, adding the gunmen had not managed to enter the academy.

The city is still mourning the more than 100 people killed by a suicide bomber who used an ambulance to penetarte security and detonate a device in a crowded city street.

More than 200 people were killed by the bomb which followed an attack by the Taliban on the Intercontinental hotel in Kabul last Sunday, killing at least 22 people, and an assault on the offices of Save the Children in Jalalabad on Wednesday in which six people died. The latter attack was claimed by Islamic State.