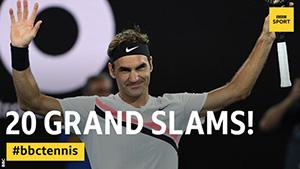 When Roger Federer won back his Australian Open title a year ago, five years after his previous Grand Slam title, it felt like an impossible gift from the past, one final reminder of what had once been at a time when all assumed it had gone forever.

The man was 35. He had been out for six months after knee surgery and back problems, 17th seed for a reason. You were astonished by the comeback and you were thankful to have witnessed one glorious final heist.

We were all fools. In the past 12 months Federer has now won three Grand Slam titles. At 36 he began this Aussie Open as favourite and then won it with the loss of only two sets (and both of those in the final).

This is not nostalgia. This is now. This a new dominance, not an echo of past glories, a greatest hits tour that has produced three fresh classics.

In the build-up to Sunday’s final against Marin Cilic, Federer went into Melbourne to seek inspiration by watching Gary Oldman’s new Churchill biopic.

It was his only misjudgement of the fortnight. Darkest Hour? This is more a second golden age, and there is no reason to think it will be a brief one.

In the six years from 2011 to 2016, Federer won just one Grand Slam title. A year ago he was supposed to be not only past his prime but past the period when he was past his prime.

He injured his knee running a bath for his four kids. At Wimbledon he fell on his face in futile chase of a forehand from Milos Raonic, a man with half his range of skills but nine years younger and faster. He had finally admitted that he needed to use a bigger racquet-head, like a man accepting middle age by wearing reading glasses round the house.

Novak Djokovic was the king, Andy Murray in charge of his own grassy empire. The kids were queuing up outside them. A graceful retirement appeared to be accelerating round the corner.

And now this: an Australian Open title, the regaining of his Wimbledon crown, the retention of his title in Melbourne. With Rafa Nadal defending a lot of ranking points over the next two months, it is quite possible that Federer could be world number one again by the end of March.

Twenty Grand Slam singles titles, four more than any other man (Nadal) in history, within three of Serena Williams, the other great survivor and revivalist of the modern game. And why should it stop there, with his rivals injured and the young dashers stalled, and Wimbledon waiting to welcome him back once more?

Federer’s win in Melbourne 12 months ago brought back memories of Jack Nicklaus winning his 18th major at Augusta in 1986, 23 years after his first, six years after his last. But that was it for Nicklaus, barring a sentimental charge to sixth place at the Masters in 1998.

It triggered comparisons too with Muhammad Ali in Kinshasa in October 1974, winning back his own crown from George Foreman at the age of 32, a champion returning from exile in a way few could believe.

Ali would have two more defining nights, once when out-surviving Joe Frazier in that brutal death-spiral in Manilla a year later, again when winning his re-match with Leon Spinks at an age when his aura could barely disguise the damage done to his body and mind.

In adding two more Grand Slam titles in the past six months Federer has found further echoes of those extraordinary deeds.

You would describe it as raging at the dying of the light, but he could never rage. These triumphs have been made with the same physical grace and unhurried style as a decade ago.

There were times on Sunday – the tournament’s extreme heat policy in place, the roof on and the stationary spectators gasping in the humidity – when Cilic looked so hot and bothered that you could see sweat flying off his racquet as well as his forehead.

Federer only seldom looked troubled, at the end of the second set and then as he let slip what had appeared to be a decisive lead in the fourth. Even then they were brief interruptions. Temperatures climb but Federer keeps floating. In an era of muscle-men and baseline toilers he flows round the court like iced water.

It is like watching Michael Holding bowling 88mph bouncers, menace disguised as serenity, or Wilson Kipketer in the home straight of an 800m, pace without apparent effort. Federer at 36 moves better than most elite sportsmen at 21.

There is an argument that his renaissance – and that of Nadal, winner of the other two Slams in 2017, denied a place in the final here primarily through injury, favourite for the next in Paris – is in some ways bad news for men’s tennis.

The game is missing too many of its star names. Murray’s hip has him on permanent hold; Djokovic’s elbow is pulling him back. Stan Wawrinka is struggling with his knee, Kei Nishikori his wrist.

The tournament had semi-finalists in Hyeon Chung and Kyle Edmund who are 21 and 23 years old respectively. But of the other young guns there is as yet too little.

Nick Kyrgios is still what might be. Bernard Tomic, the other great local hope, is closing in on might have been. As Federer lifted the Norman Brookes Challenge Cup on Sunday, Tomic was being bitten by a snake on the Australian version of I’m A Celebrity.

The competition has fallen away. When he won Wimbledon last summer it was the first time in almost eight years that he had not had to play one of the other Big Four en route to a Slam final, and in Melbourne that pattern repeated.

But as it has done so, Federer has risen again, and only the small-minded and cynical could not be moved by the impossibility of it all.