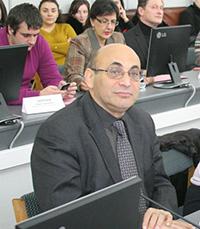 Azerbaijani human rights defender and historian Arif Yunus, who is currently in political deportation in the Netherlands, recently gave an interview to the Azerbaijani “Objective TV” online TV channel, where he insisted that the Armenian massacres in Baku in January 1990, and “Black January” were organized by Heydar Aliyev’s order, to bring him back to power. “There are many legends about the events of January 20 in Azerbaijan, moreover, they perceive it as a glorious page of heroic struggle and an episode of the national-democratic movement, as a result of which Azerbaijan became independent. But in fact, the events of January 1990 are connected with Heydar Aliyev’s role”, Yunus said. According to him, coming to power in Azerbaijan in 1988, the first secretary of the Communist Party, Abdurrahman Vezirov, began an investigation against Heydar Aliyev in agreement with Gorbachev. The investigation included not only the entire period of his administration, 1969-1982, but also earlier periods: how he had changed his documents (birth date), not to leave for the frontline during the Second World War, as well as the scandal connected with one of the female employees of the Committee for State Security. According to Yunus, in December 1989, it became known that the best and experienced investigators from all USSR arrived in Baku, who registered in “Apsheron” hotel. At the same time, it became known that on January 15, 1990, the USSR General Prosecutor’s Office was going to summarize the results of the investigation, which would determine Heydar Aliyev’s fate. Of course, not in his favor. And in late January, Aliyev and his whole team were to be deported and removed from the ranks of the party and then disappear from the political stage. Of course, Heydar Aliyev was aware of all this and started anti-activities through his people of national front. Abulfaz Elchibey and Nemat Panahli were his people in Nakhichevan. They were also supported by other activists of the Aliyev clan – Etibar Mammadov, Fazail Aghamali, and Bejan Farzaliyev. Nemat Panahli, a prominent figure in the national front of Azerbaijan, was popular among demonstrators in 1989. In one of his meetings with Heydar Aliyev, the latter said: “We need blood, lots of blood”. And Nemat Panahli sincerely told about this during an interview with the “Monitor” periodical. And Nemat Panahli organized the demolition of the state border in Nakhichevan on December 31, 1989, although Moscow had already signed the agreement (from the Azerbaijani side it was signed by Foreign Minister Hussein Agha Sadikhov), allowing to open the border and promised that the CSS frontier guards would not fire. But it was only Nemat Panahli who knew about it in Baku, and who organized the theatrical demolition of the border, pretending to be a national hero. And in early January 1990, Panahli became the organizer of Armenian massacres. Arif Yunus told that in 1992 he was specially engaged in the investigation of bloody events of January 1990, and invited Azerbaijani CSS Lieutenant Colonel Oleg Aliyev to Azerbaijani President’s office (in 1992-1993 Yunus headed the Information and Analytical Department of the President’s Office of Azerbaijan). The latter said that Nemat Panahli’s office was then in the capital, in the Schmidt Factory, where people brought robberies and expensive jewelry from Armenians’ houses in those bloody days. Whether Panahli personally killed Armenians, Yunus does not insist, but he has no doubts that Panahli himself organized these massacres and the murder of innocent Armenians in Baku. Moscow knew about all this, but not only did not hinder the massacres but also used them to bring troops to Baku on January 20. Oleg Aliyev then told him directly that the CSS was well aware that Panahli was hiding after January 20. But neither Moscow nor the CSS administration of Azerbaijan allowed to touch him. Elchibey did everything to end the investigation against Heydar Aliyev so that he could return to power. In response to a journalist’s question whether what role the national front of Azerbaijan had, Yunus said that the organization was divided into “extremists”, “centrist” and “liberals” on January 6, 1990. Whether who the CSS agent was, and why the archives of that organization were not opened in 1992, Arif Yunus replied, that Panahli was not an agent, but simply fulfilled Heydar Aliyev’s will. And the archives were not opened because of the position of Elchibey and Parliament Speaker Isa Gambar. They were against that.