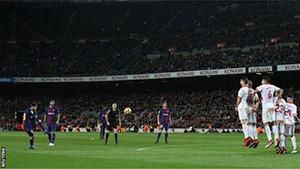 Philippe Coutinho’s Barcelona league debut ended in victory as his new side came from behind to beat lowly Alaves at the Nou Camp.

Lionel Messi had a free-kick touched on to the post by Alaves keeper Fernando Pacheco before Luis Suarez equalised.

Messi secured the points for the La Liga leaders with a sublime free-kick.

Barcelona are 11 points clear of nearest rivals Atletico Madrid, who won 3-0 earlier on Sunday at home to Las Palmas.

Basque club Alaves, 17th in the table, were on course to cause an upset when Guidetti, on loan from Celta Vigo, fired his side ahead in the first half.

Barca dominated possession but looked set for a frustrating night.

Messi had an earlier free-kick touched onto the post while Paulinho had another chance hooked off the line and Coutinho, a £142m signing from Liverpool, had a shot deflected wide.

Alaves were lively throughout and could have added a second goal soon after going ahead, Ruben Sobrino seeing a chance clawed away, while Ruben Duarte was denied by Gerard Pique’s block.

Suarez volleyed home after being teed up by Andres Iniesta for Barca’s equaliser before Messi’s brilliant set-piece near the end sealed the points.