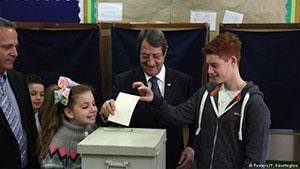 President Nicos Anastasiades won the first round of voting but failed to garner the 50 percent needed to avoid a run-off. At stake is the future of an island that has been divided for 44 years.

Cyprus will hold a second round of voting next Sunday after President Nicos Anastasiades failed to gain the absolute majority needed for an immediate win.

The incumbent president took 35.5 percent of the vote. His nearest opponent was the Communist-backed Stavros Malas, with 30.25 percent. Malas, a former health minister, lost his first presidential bid to Anastasiades in 2013.

Anastasiades is a former lawyer who campaigned under the slogan: “Steady Steps Forward” — a reference to his slow but steady stewardship of his country’s economy.

The request for reunification

At 71 percent, turnout was down considerably from the last election in 2013. Experts point to voter apathy among young voters who feel disenfranchised by an insular system.

Cyprus was devastated by a financial crisis in 2013 that sent the banking sector into meltdown. That forced the government to seek a $12 billion (€10 billion) bailout from international lenders and impose harsh austerity measures.

But the economy has rebounded faster than expected thanks, in part, to a thriving tourism sector and ongoing explorations for offshore oil and gas.

The divided island has been a member of the European Union since 2004. However, only one part of the island, which has been divided by a dispute between Greece and Turkey for 44 years, belongs to the bloc.

Only voters in the Cypriot Greek area in the south, which is recognized internationally as the Republic of Cyprus, were able to cast their ballots Sunday.