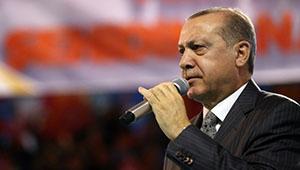 Addressing a local Justice and Development Party (AKP) congress ahead of the 2019 elections, Turkish President Recep Tayyip Erdoğan on Sunday said he would go to the Afrin region of Syria if necessary and called on people to follow him, the state-run Anadolu news agency and Sputnik reported.

“If needed, I, the top commander, would be the first one to go to Afrin. You would then follow me,” said Erdoğan during the AKP congress in Amasya province.

Erdoğan said Turkish troops are in Syria to ready conditions for the return of 3.5 million Syrian refugees in Turkey.

Stating that the Turkish military and Free Syrian Army (FSA) fighters have captured the strategic Bursaya Mountain in Afrin, Erdoğan said: “They did it some despite some impertinent people. They did it despite the European Parliament. Some in the EP call Turkish troops ‘occupiers.’ You [Europeans] should look at your past, what you did in Africa.”

Turkish Foreign Minister Mevlüt Çavuşoğlu on Saturday called on the United States to withdraw personnel from the Kurdish-held town of Manbij in northern Syria, amid tension that escalated between Ankara and Washington following Turkey’s operation in Afrin.

President Erdoğan on Friday reacted to calls from the US to wrap up the operation in Afrin, defying Washington and saying that Manbij would be the next target.

Manbij is controlled by the Kurdish-led, US-backed PYD, which Turkey sees as the Syrian extension of the outlawed Kurdistan Workers’ Party (PKK).

President Erdoğan on Oct. 8 said Turkey would not allow a Kurdish corridor in Syria extending along the Turkish border to the Mediterranean.