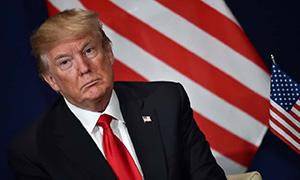 Independent counsel who investigated Bill Clinton says: ‘Lying to the American people is a serious issue that has to be explored’

If Donald Trump lied to the American people when he called reports he tried to fire Robert Mueller “fake news”, that would be grounds for impeachment, the independent counsel who investigated the Clinton White House said on Sunday.

Starr said: “That is something Bob Mueller should look at.”

Mueller, the special counsel, is investigating Russia’s interference in the 2016 presidential election, including alleged collusion between Russian officials and Trump aides, and numerous instances of possible obstruction of justice by the president.

The New York Times and others reported this week that in June 2017, Trump ordered White House counsel Donald McGahn to fire Mueller. McGahn reportedly said he would resign rather than carry our the order, which he said would have a devastating effect on Trump’s presidency.

If President Trump’s denial of the reports he tried to fire Robert Mueller are not true, would that be grounds for impeachment? Ken Starr tells @MarthaRaddatz, “I take lying to the American people very, very seriously. So, absolutely.” #ThisWeek pic.twitter.com/GxfUznvMry

Trump told reporters at the same time: “I haven’t given it any thought.” He added: “Well, I’ve been reading about it from you people. You say, ‘Oh, I’m going to dismiss him.’ No, I’m not dismissing anybody.”

Some Republicans said on Sunday that reports Trump had to be talked down from firing Mueller were a serious concern and should prompt congressional action.

Attempting to fire Mueller would mean “the end of [Trump’s] presidency,” the South Carolina senator Lindsay Graham, a sponsor of potential legislation, said on ABC.

“It’s pretty clear to me that everybody in the White House knows that it’d be the end of President Trump’s presidency if he fired Mr Mueller,” Graham said.

Susan Collins told CNN’s State of the Union it “probably wouldn’t hurt” for Congress to pass a law protecting Mueller.

He told NBC’s Meet the Press: “I don’t think there’s a need for legislation right now to protect Mueller.”

Asked if there was “a red line the president could cross with you” regarding the special counsel, McCarthy said the question was unfair.

“The president and his team have fully cooperated,” he said. “You’re making hypotheticals.”

McCarthy did not directly answer questions about whether he was concerned about reports Trump had wanted to fire Mueller in June. He had confidence in Mueller, he said, but had “questions about others within the FBI and [Department of Justice]”.

Asked if he believed there was some kind of “deep state that’s out to get the president”, as some on the right claim, McCarthy said he had never believed that but said some recent reports about the FBI would “give anybody doubt”.

“I think the public has the right to know,” McCarthy answered.

Collins, a leading Republican moderate, told CNN: “It probably wouldn’t hurt for us to pass one of those bills [to protect Mueller from being fired].

“There are some constitutional issues with those bills. but it certainly wouldn’t hurt to put that extra safeguards in place given the latest stories.”

Collins said she had confidence in deputy attorney general Rod Rosenstein, who is overseeing the Russia investigation after Jeff Sessions recused himself because of his failure to disclose his own contacts with Russian officials during the presidential campaign.

Rosenstein appointed Mueller after Trump fired FBI director James Comey last May. He has reportedly been the focus of Trump’s ire in recent days.

White House legislative affairs director Marc Short appeared on Fox News Sunday. Asked if Trump would sign a bill that would make it more difficult or even impossible for Mueller to be fired, he said: “I don’t know, hypothetically.”

Trump insisted this week he was “looking forward” to being interviewed soon by Mueller.